Mules over mountains – a wild mining story from old Idaho

How did supplies get moved to remote places like mining camps in the old west? They got packed in on the backs of mules, as shown above in an 1871 U. S. Army image.

Last April I saw a newspaper article about a memorial honoring Jesus Urquides, a Mexican-American pioneer. Over at the public library I found Max Delgado’s 2006 book Jesus Urquides: Idaho’s Premier Muleteer, which was based on his master’s thesis in history at Boise State University. There is a wild story in there (on page 54) about how back in 1892 Jesus used his mules to carry a six-ton coil of 7/8” diameter wire rope for a Swem aerial tramway from Challis over three mountains to the Yellowjacket gold mine.

Like most wonderful old stories, this one was written about three decades after it happened in late fall of 1892. Urquides told one version to the Idaho Statesman, and G. L. Sheldon told another different one in the Christmas 1920 issue of the Engineering and Mining Journal. (Look up his article on Mining Experiences in Idaho in the Nineties on Google Books).

The Yellowjacket mine was located on a mountain 1,200 feet higher than the mill. Ore had to be hauled down in horse-drawn wagons or sleighs. So, they decided to put in an aerial tramway that instead would carry it in 125-pound buckets. The problem was that to construct it they needed to move an 8,400 foot length of wire rope as a single coil over mountain trails. Urquides said:

“It was necessary to get this wire to the mine without any break, for a splice would have been too dangerous for tramway work…and I loaded it on 35 mules, spreading it out with the mules in three rows. We had to pack between 60 and 70 miles up and down the steepest mountainsides. Several times, one of my mules would roll down the side of the mountain, taking the rest with them. Then it was necessary to get them all up, repack again, and start out. I never coveted another job like that.”

According to Sheldon the tramway decreased their ore transportation costs per ton from $2.50 to $0.07. You can find more stories in a freely downloadable 175-page book-length bulletin by Merle W. Wells called Gold Camps & Silver Cities (Nineteenth Century Mining in Central and Southern Idaho).

There was a rush to Yellow Jacket in 1869 after Nathan Smith and his party located what they thought was a rich gold strike. But apparently one of the prospectors of the party had “salted” the area with some California gold and the site wasn’t as rich at first believed.

But just as most of the disappointed prospectors were leaving, a rich quartz lode was found that would eventually yield millions of dollars in gold. Despite the remote location a thirty stamp mill was packed into the area. A few years later, additional investment doubled it’s size and made it one of Idaho’s largest stamp mills.

The investors also decided to build an aerial tramway to ease production costs. But packing in eight thousand feet of cable on the backs of twenty mules turned out to be a huge undertaking.

According to G. L. Sheldon the cable was laid out in the streets of Challis and “nearly all the inhabitants of the country were on hand to see the pack train start.” He added, “In a hollow the rope would lift the center mule of its feet.”
Despite the difficulties the mules and the cable eventually made it to Yellow Jacket.

One family has been involved with much of the history of the Yellow Jacket. In 1888
John G. Morrison and his nephews the Steen brothers acquired a controlling interest in the mine. In four years they extracted about 4800 ounces of gold. Though they sold the property in 1892 the Steen family eventually reacquired the Yellow Jacket decades later.

And though members of the family spent many frustrating years trying to make the mine profitable again, it finally did yield yet another round of mineral wealth.

Today the Steen family says mining is over at the Yellow Jacket and that they are now focusing on preserving the historic remnants of the 19th century gold camp.

Discoveries by Nathan Smith led to a rush from Loon Creek to Yellow Jacket, September 23, 1869. Although the original placers proved to be a disappointment, and although quartz operations there were handicapped by the extreme remoteness of the district, the gold quartz was free milling. By 1892, Colorado investors arranged for a large tram to make milling practical.

A thirty-stamp mill, packed into Yellow Jacket in 1894, was doubled in size when major production got underway, and a sixty-stamp mill was run by water power until labor costs became too high in 1896. Tailings were reworked profitably after the shutdown, but intermittent attempts to operate there from 1912 to 1984 had very limited results. Mining efforts on nearby Silver Creek from 1876 to 1897 encountered similar problems. Perhaps $400,000 was recovered at Yellow Jacket, mainly in the nineteenth century.

Be it known that I, James M. Swem, a citizen of the United States of America, residing at Denver, in the county of Arapahoe and State of Colorado, have invented certain new and useful Improvements in Ore-Tramways; and I do declare the following to be a full, clear, and exact description of the invention, such as will enable others skilled in the art to which it appertains to make and use the same, reference being bad to the accompanying drawings, and to the figures of reference marked thereon, which form a part of this specification.

My invention relates to improvements in overhead tramways of the class designed for carrying ore down mountains or over rugged sections of country where other means of transportation are impracticable.

To this end, the invention consists of the features hereinafter described and claimed, all of which will be fully understood by reference to the accompanying drawings, in which is illustrated an embodiment thereof. 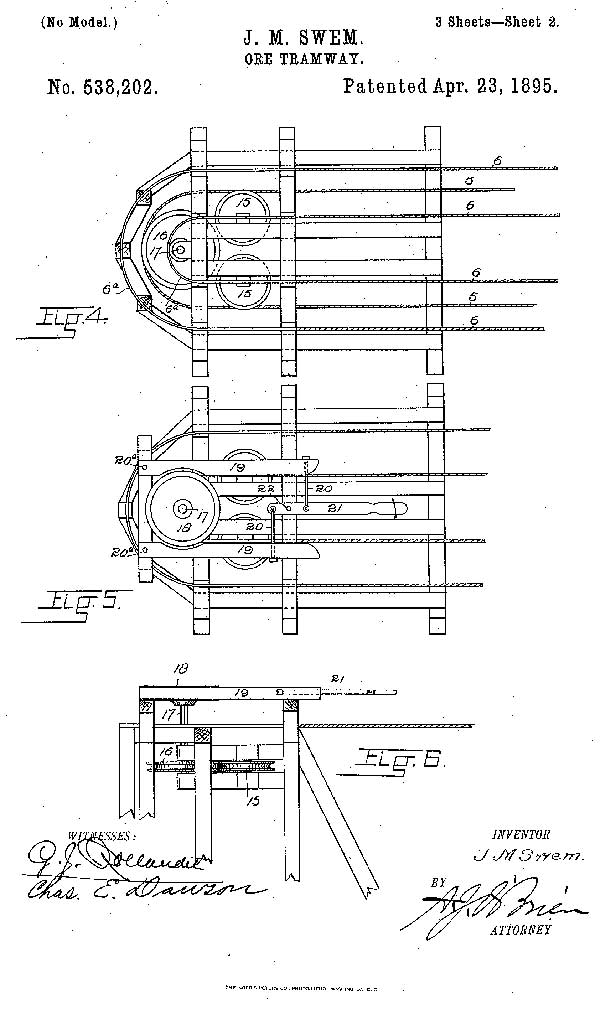 History of the Yellowjacket Mine