Idaho Back-Country: The Men, The Mountain, The Gold And The Town That Drowned

Gold fever has long been an ailment in the history of Idaho mining. One of those epidemics broke out when twin brothers Ben and Lou Caswell found gold on remote Thunder Mountain in Valley County in central Idaho. They talked openly about it in Boise and then newspapers went wild.

A rollercoaster ride began, drawing investors and miners from coast-to-coast—some even from overseas.

It was an exciting ride at the beginning of the 20th century. Poor folks jumped in hoping to get rich quick, while big names wanted to get richer.

It all started about 1894 when the Caswell twins, their brother Dan and cousin A.O. Huntley came to Idaho from Colorado to trap, hunt and look for mineral riches in the Seven Devils area in the Hells’ Canyon Wilderness – without success. Next, they tried Thunder Mountain (8,579 feet) and found surface gold at the mouth of Monumental Creek that flowed down from it.

The mountain got its name because during storms, the sound of lightning striking nearby Rainbow Peak reverberated across the canyon and sounded like thunder – making the earth seem to tremble.

The men panned for gold by running water from the melting snow through a sluice rocker box. It was a short season but paid off.

In 1894, they recovered $245 worth of gold in eight days—about $7,000 in today’s money. The following year, they made another $190, while they started building sluices for future production.

Then one day in 1900 at the old Overland Hotel in Boise, a man named Erb Johnson showed a glitzy sample of the Caswell gold to Ed H. Dewey who quickly told his father, the “fabulous Col. Dewey” in Pittsburgh about it. Millionaire Col. William H. Dewey instructed his son to get an 18-month option on the Caswell property and would pay $100,000 for it.

One report said, “The extent of this auriferous (gold-bearing) porphyry is not known, but the whole mountain appears to be porphyry (igneous rock with crystals embedded in finer grained minerals).”

The word was out, and by 1902 a frenzy of some 20,000 rushed to Thunder Mountain buying claims—most worthless. Newspaper headlines screamed the latest news:

“2,000 men working in mines, twice as many as many more seeking gold in district.”

The Caswells described the mountain as a great volcanic crater filled with the gold-bearing rock and that “gold is found everywhere.” However, while they were doing well, some unscrupulous operators were resorting to fraud by “salting” worthless claims they were selling with real gold.

“Thunder Mountain itself is nothing but a mass of ore,” another report touted. “This has been fully demonstrated by the operations of Col. Dewey and his associates. It is ore everywhere… the almost limitless quantities in sight will make it one of the most productive sections of the world.”

“It is a mountain of gold!” others claimed. “Whatever its origin—whether it came up, fell down or slid in, we cannot say—but the fact remains that the whole mass of conglomerated material carries the royal metal in paying quantities. There are no veins. Not a piece of quartz, even, can be found in that marvelous monument of mineralogy.”

With that kind of publicity, everyone wanted a piece of the action. Union Pacific and Northern Pacific talked about opening up the area, while cities and towns discussed building roads and bridges. Boise haberdasher and future governor of Idaho Moses Alexander sent “Jake” Ullman to open a satellite store in Roosevelt.

Cities and towns like Boise, Lewiston, Pocatello, Idaho City, Blackfoot, Weiser, Emmett, Grangeville, Dixie, Salmon, Mackay and Ketchum advertised their routes to Thunder Mountain. When Colonel Dewey, returned from Pittsburgh with $100,000 to buy out the Caswells, a report trumpeted, “Colonel W. H. Dewey of Idaho believes he is the richest man in the world or that he soon will be…The colonel carries in his pocket a little Vaseline bottle filled with pure gold, all extracted from just three pounds of quartz.”

Few seemed to sense a foreboding about the mountain that smiled down on all the buzz.

The glint of gold can be blinding to reality. Weather conditions, rugged landscape, lack of roads or means of transportation, operating capital, mining skills, high-priced food and supplies and other factors didn’t seemed to deter lone prospectors or big hitters.

Adrenaline was running high in Idaho towns where prospectors were waiting out the winter of 1901-02, hoping for an early spring when they could race to the “mountain of gold.” Some couldn’t wait and headed out into the snow. On Feb. 10, three miners were killed in a snow slide near Elk summit between Thunder Mountain and Warren.

March opened with heavy snowfall, scarcity of fuel to operate Dewey’s mill, and all timber within a mile had been used up; 250 speculators were more interested in gobbling up new claims rather than going to work; the price of flour jumped to $50 a sack, and Boise traffic could only reach the camps on horses fitted with snowshoes.

“Supplies and machinery are freighted to Bear Valley, about 100 miles above Boise,” one report said, “where they are transferred to the big pack trains and transported 80 miles further to the mines. To one who has not been over the route, no conception of the difficulties encountered can be had. Every pound of freight has cost the operators 6 1/4 cents per pound, or $125 per ton.”

One difficulty was getting the ore down the mountain to the mill. That was no job for “little guys” without much money, and better suited for wealthy miners like Col. Dewey who could afford the machinery and labor needed. But he had his problems too:

He had two mills shipped from Chicago — one a 10-stamp mill that could crush from 50 to 70 tons of ore in a day, and the other a 100-stamp mill. The big one only got as far as Emmett and languished there for two years and was never used. A hotel bought the boilers.

The stampede to the “New El Dorado Mountain” began on Sunday, May 25, 1902, with 350 loaded horses and a hundred men crossing Elk Creek Summit into the mountain.

Tent towns sprang up virtually overnight. One of them – named Roosevelt, after Teddy – was located about 4,000 feet altitude just northwest of the mountain on Mule Creek and described as “A log town with one street and no society.”

As the town was just beginning, the Boise Clipper newspaper noted the location was protected from snow-slides by dense timber growth, but if the timber was harvested to build the town, that protection would be gone “and someday Roosevelt will be wiped from the face of the earth.” That would be prophetic.

In the years that followed, it was mostly blood, sweat and tears on Thunder Mountain. Everyone overestimated the amount of gold per ton of ore, and operating expenses were much too high. Few made a profit. Some of the big boys did, but not the Colonel. He recovered only about half of his investment.

On May 30, 1909 volcanic ash soaked with water began slowly sliding down the unstable mountainside toward Roosevelt. Everyone evacuated in time, but two days later the slide blocked Monumental Creek and created Roosevelt Lake, flooding the town forever.

By the end of the year, the Thunder Mountain bonanza was all over. A few continuing efforts sputtered for a while, then everyone pulled out. Col. Dewey died the following year – along with his dream.

Today, Thunder Mountain is once again a remote wilderness with no people – except for the occasional hunter, hiker or ranger. Water in the lake has gone down, and a few timbers from Roosevelt have reappeared.

And the thunder of passing storms still echo a brief and almost golden past.

Copyright Idaho state Historical Society 2012. Permission is required for use in any form. For further information please contact the Idaho state Archives. source

Roosevelt, Idaho, 85 miles NE of Cascade, became the major town of the Thunder Mountain gold rush in 1902. Col. William H. Dewey bought in and everyone thought it was going to be a huge strike. It didn’t happen. By 1907 Dewey closed down his mine. On May 30, 1909, before most of the miners returned for the season, A landslide blocked off the lower valley effectively damming Monumental Creek. The water backed up and flooded the town, known today as Roosevelt Lake. 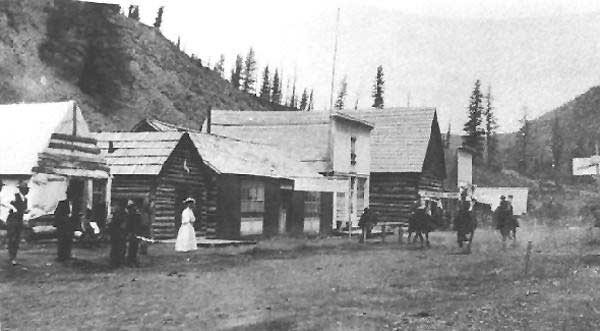