Seems as though there was a Saturday night dance about once a month: first at the postmaster’s (A. E. Behne) cabin and, after it was built (circa 1922?), at the little schoolhouse. The music at Behne’s was from his victrola but later at the school cabin it was “live” – McCoy’s (forgotten his name) fiddle and various harmonica tootlers. For some of the dancers(?) as the night wore on and the jug levels dropped, it became more of an athletic contest than a dance with contestants out leaping each other and alighting with great fervor (origin of the Yellow Pine Stomp!?!) – I remember one night when Gil McCoy outdid himself by putting his foot squarely through the floor; that ended that dance because his foot was wedged securely and a couple of men had to chop him loose!” 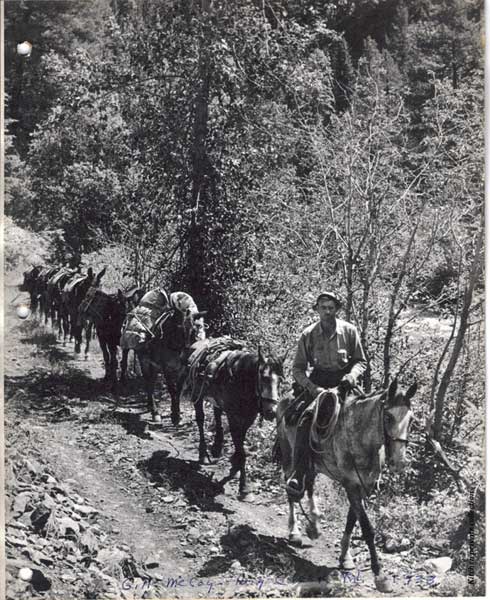 Fourth of July in Yellow Pine

It really started about a week before when Sim Willey and his family would start for Yellow Pine from the Willey Ranch down the South Fork driving a steer for the old-fashioned barbecue. Then on the morning of the 3rd a couple of men with large canvas backpacks would go up Quartz Creek to the north cliffs where packed icy snow still lingered – they would overnite and then start back with a hundred pounds or so of ice for the once-a-year ice cream we enjoyed so. In the meantime the steer was spitted over a large barbecue pit in which there was a deep bed of glowing coals; men worked in shifts through the night, turning the spit and feeding the fire and basting the carcass.

About daybreak, or a bit before, the celebration began with a literal “bang”. Typical was Dad’s “alarm clock”: a quarter of a stick of dynamite on top of an anvil with another anvil inverted over it! The resultant bang-clang would be heard for miles.

The feast was something to behold on a long community picnic table near the barbecue pit. The ladies of the community vied mightily in a sort of gustatory Olympics of male approbation – that’s probably a very poor choice of words since the contest wasn’t all sportsmanlike; in fact, there were several resulting, long-lasting feuds which arose!

After the sumptuous repast and a few naps there would be the usual contests: sack races, three-legged races, etc. with a few coins to winning children – returns to the picnic table for snacks – and a makeshift local rodeo or ball game at the field below town. In those days it was a yearly highlight with attendance by many people from miles around. Looking back it doesn’t appear all that much – I guess it was easier to entertain us then!

“This is an old photo taken by my grandparents. Years ago they used to live near Yellow Pine, and would take my dad and Aunt to the tavern for candy or milkshakes (at least that’s how dad remembers it) ”

[posted at the old Stumble Inn message board]
— — —

The tavern was built by Murphy and Mary Earl in 1940 and it has been in the Earl family every since. The log bar top originally extended further back than it does today. There were outhouses, an icehouse and a generator shack out back. Murph and Blondie McGill, Murph’s partner, were flying into Chamberlain Basin where McGill had cattle interests. They set down in Yellow Pine and were unable to buy a drink as there were no bars open.

Being saloonkeepers from Idaho City and Boise (the old Western on Main Street), they decided to remedy that situation and build a bar.

Obituary — Services for Murphy F. Earl, 71, Horseshoe Bend, who died Jan. 10, 1982, in a Boise hospital, will be conducted at 3 p.m. Saturday in Summers Funeral Home by the Rev. Bill Williams of King of Glory Lutheran Church. Private family interment will be Monday.

He was born Feb. 23, 1910, in Sioux City, Iowa. He married Mary L. Raski on Oct. 25, 1930, in Milwaukee, Wisconsin. In the early 1930s, they moved to Idaho City, where they owned and operated a cafe and bar. In the early 1940s, they moved to Yellow Pine, where they operated a bar and cafe. He owned and operated the Western Bar and Cafe in Boise and a feedlot near Eagle. He and a partner built and operated the Outlaw Inn and the Turf Club in Garden City. His wife died in October, 1974.

Shootin’ up the Village

from The Yellow Pine Times April 2005

Sunday April 17th, approximately 10pm – several gun shots were heard on “main street” by most of the village residents. Witnesses reported hearing a series of shots from a small caliber gun that started outside the Corner Bar and traveled south down the main street. A short while later, a larger caliber gun was heard being fired – near the Community Hall. A couple of residents shouted from their porches to cease fire! Then it was quite.

The following morning, Monday April 18th, one sharp eyed neighbor noticed that the motor home (parked near the community hall) had had its tires flattened during the night.

On Tuesday, Mr. Eisberg called a meeting at the Silver Dollar Grill to apologize for the shootings Sunday night.

Thursday afternoon, a local resident entered our Community Hall to play ping pong and discovered that the table had a long fresh groove in its surface and then turned and saw that the front door had 3 bullet holes in it. 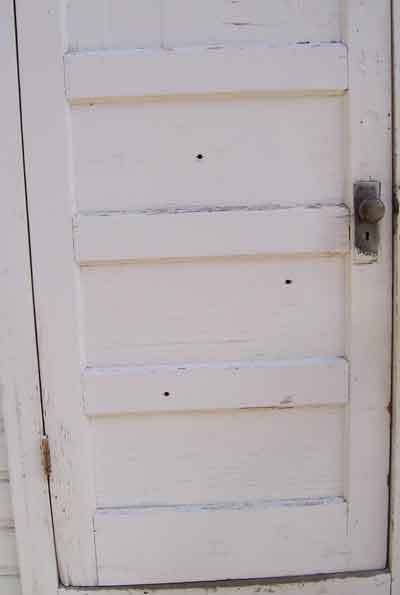 Subsequent investigation turned up bullet holes in the stage and wall opposite the front door, that continued through into the kitchen area. One bullet just missed an electrical outlet.

Our Village of Yellow Pine Association Chairman was notified, and Valley County contacted. Investigators from the Sheriff’s department came in on Saturday and collected up evidence including bullets and the tires that were flattened.

Saloons were part of a man’s world in early Idaho

By Arthur Hart Special to the Idaho Statesman May 27, 2017

Even the smallest frontier Idaho towns had a saloon, and often two or three. With a largely male population of miners, cowboys and gamblers, it was a social center where you could play cards, shoot pool or mellow out on cheap whiskey.

Newspaper accounts of violence in Idaho saloons of the 1860s and ’70s nearly always made a distinction between “good whiskey” and “bad whiskey,” suggesting that it was the rot-gut bad kind that caused all the trouble. The editor of the Idaho Tri-weekly Statesman commented on July 21, 1871, “For the amount of saloons there are in this city it is singular that there is so little fighting going on. They must sell but little of the bust-head sort.” After a soldier from Fort Boise got drunk and started a fight in a Main Street saloon, the paper commented, “Cause, bad whiskey, of course.”

Part of the problem was that just about anybody with a few dollars and no other means of livelihood could buy a small stock of cheap whiskey and go into business for himself. Idaho City’s Idaho World said of saloons in July 1870, “There is only about a dozen or so more than there ought to be in Idaho City. Two or three houses might do a good business, but as long as a license to sell liquor costs as little as it does now we will have any number of saloons with none of them scarcely making a living.” Raising the cost of a license, the World thought, “would shut up and close out nearly all the little doggeries and ‘dead falls’ where villainous compounds are dealt out to everyone calling for it, drunk or sober, and where one-half or two-thirds of the crimes and violations of the law are hatched and concocted.”

Since a large part of the male population of Boise City was spending a lot of time in saloons, the proprietor of Johnny Crowe’s Sample Rooms sought to amuse the readers of his ads in the Statesman by listing popular euphemisms for inviting a friend to have a drink: “Let’s take a nip; irrigate; throw yourself around of suthin’; let’s smile; let’s wrestle with the common enemy; let’s drown the worm; let’s refrigerate; let’s stimulate; take a little pisen; hang your hat on a limb; open your mouth and prepare for a scorching of your innards.”

The Statesman ran saloon ads regularly yet campaigned for a more peaceful Main Street: “Drawing pistols and knives, whenever a little misunderstanding occurs, is and has been too frequently indulged in in this city, and the law in relation thereto should be rigidly enforced.”

That drinking was all too prevalent in little old Boise was recognized by the paper with this quip printed in May 1872: “Early rising is usually considered an indication of thrift. In this city it indicates that a man is thirsty.”

Pay day, as it was typically celebrated by miners, was described in the Statesman on July 22, 1890: “They had no sooner received their pay than they proceeded to fill up on beer and other intoxicants, and soon became noisy and troublesome. They indulged in a number of fist fights on the corner of Ninth and Main.” Boise’s small police force had its hands full on evenings like this, and the small jail could not hold all of those who could have been arrested but weren’t.

Boise City, capital of the new state of Idaho, was a family town and a church-going town yet had 16 saloons, one for every 250 people. This reflects in part the large number of men from snow-bound mining camps who spent their winters in the milder climate of the capital city. Saloons and prostitution played a significant part in the city’s economy, although they occasionally fostered crimes of violence.

Polk’s 1880-1890 directory lists 234 active saloons in 61 Idaho towns; it was indeed, for all its faults, an institution with wide appeal to men, and even to some women.