Richard Leigh (pronounced “Lee”) was born January 9, 1831, in Manchester, England. While still very young, he travelled to America to seek out his fortune. Upon his arrival, he began working for the Hudson Bay Fur Company, trapping animals for their pelts. At only 17 years old, Leigh joined American forces and fought in the Mexican War.

At the conclusion of his time as a soldier, Leigh travelled north through Utah where he met none other than Brigham Young in the Salt Lake area. While there’s no official record as to the sure origin of Richard Leigh’s nickname, it’s most commonly believed that Brigham Young was the first to call him “Beaver Dick,” on account of his love and skill for beaver trapping.

Conflicting stories claim the name was given to him due to his beaver-like front teeth, or that it was native Americans who first started using the moniker. Whatever the truth may be, Leigh came to be known much more widely as Richard “Beaver Dick” Leigh.

While the beaver fur trade boom had fizzled by 1840, Beaver Dick continued trapping, but this time he created trapping lines through the Teton region. He became fluent in both the Bannock and Shoshone languages, and eventually married a Native American woman named Jenny. He became the first non-native American man to settle permanently in the Upper Snake River Valley of Idaho.

Beaver Dick and Jenny had six children together. He provided by spending most of his time hunting and trapping along his lines, and selling the pelts at several small trading posts in the area. The man was tough, to say the least. Braving the rough conditions of an unsettled area, most often alone, his life was filled with many dangerous and exciting experiences.

Of Beaver Dick, Ken Hughes of Native Unity Digest wrote, “Beaver Dick was the man of influence in the Fire-hole [Yellowstone Park] and Jackson Hole Wyoming and west of the Tetons in Idaho… His knowledge of the Teton country was unmatched by any man White or Indian; what he didn’t know his wife, Jenny, and her people did.”

In 1876 tragedy struck the home of Beaver Dick and his wife Jenny. The family took in a starving widow and child who’s path they happened to cross. Only after they had nursed them back to health did they learn that widow’s husband was killed by the smallpox virus. The widow soon contracted the disease and died.

Rather than sending the child away in fear of the spread of the virus, the family showed great compassion and took the girl in. It was an act of love that soon cost Leigh the lives his wife and six children. In December of 1876, shortly after his wife had given birth to their sixth child, his entire family as well as the orphaned girl died at the hand of the then-deadly virus.

Beaver Dick himself also contracted the disease, but with the help and care from a friend, Tom Lavering, he managed to survive. He recorded in his journal, however, that he was never quite the same after contracting the illness.

In 1863, well before the death of his family, Beaver Dick passed by an isolated camp of a Bannock Indian couple while the wife was struggling in labor. At once he offered his help, and with his help the woman named Tadpole gave birth to a healthy daughter.

The couple was so happy and thankful for his help that they promised their new daughter, Susan, to Beaver Dick in marriage when she came of age. At that time, a happily married 35-year-old, he thanked them but did not accept.

However, in 1878, now a lonely widower, Beaver found himself at For Hall, Idaho, amid a time of tension between Bannock tribes and the US Military. He was serving as a scout and hunter for the military. Coincidentally, John and Tadpole, the couple whose daughter Beaver had helped deliver 16 years prior, were also at the fort.

In 1979, Leigh did accept the gift he’d been offered years before, and married Susan Tadpole. They had three children together, and lived out their lives together happily. There are still descendants of the couple in the area.

After his second marriage, Beaver Dick continued hunting and trapping, and occasionally acted as a guide as well. He even led an expedition for Theodore Roosevelt himself. Even into his old age, he remained a man of the mountains.

In 1899, struck by serious illness and a stroke, Richard “Beaver Dick” Leigh passed away. He was buried near Rexburg on a hill that overlooks his second homestead.

source w/good story: Beaver Dick Leigh, Mountain Man of the Tetons
All photos are courtesy of the Jackson Hole Historical Society and Museum
— — — — — — — — — —

History doesn’t always stay within the tidy borders of a state. At least, that’s the excuse I’ve come up with today to tell you a story that took place in Wyoming.

Richard Leigh was a blue-eyed, red-headed man who spoke with a Cockney accent, dropping his H’s as you would expect someone from Manchester, England to do. He was born there in 1831. He had fought in a war and worked for the Hudson Bay Company before setting out on his own and settling in the Teton Valley on the Idaho side of those mountains.

I could tell a lot of stories about Richard Leigh, and probably will in future postings. Known as “Beaver Dick” because of his proficiency in catching the creatures, he was a well-known figure in early Idaho. A few bullet points:

— He served as a guide to the Hayden Expedition to Yellowstone in 1872.

— He may be the only historical figure to have two Idaho highway historical markers, one in Boise and one near Rexburg. 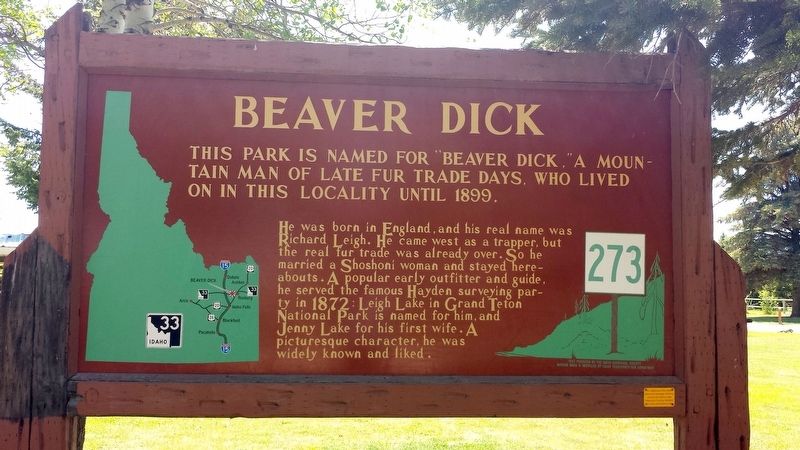 Beaver Dick
This park is named for “Beaver Dick, “ a mountain man of late fur trade days, who lived on in this locality until 1899.  He was born in England, and his real name was Richard Leigh. He came west as a trapper, but the real fur trade was already over. So he married a Shoshoni woman and stayed hereabouts. A popular early outfitter and guide, he served the famous Hayden surveying party in 1872. Leigh Lake in Grand Teton National Park is named for him, and Jenny Lake for his wife. A picturesque character, he was widely known and liked. (source)

— Leigh Lake in Grand Teton National Park is named after him. Nearby Jenny Lake is named for his first wife.

— Leigh helped a Shoshoni woman give birth to a daughter, Susan, who was promised to become Beaver Dick’s wife. He didn’t think it would ever happen, but they did marry 16 years later after Leigh lost his first family.

But this story is about Beaver Dick’s daughter Emma, from that second family.

The mountain man and his family were camped at Two Oceans Pass in 1891 when the story took place. Two Oceans Pass is in Wyoming, where Two Oceans Creek splits into two streams, Atlantic Creek dropping off the Continental Divide to end up eventually in the Gulf of Mexico and Pacific Creek going West to find its way to the mouth of the Columbia.

The Leigh family was camped alone, at first, but their peace was interrupted by the sound of a robust voice coming into the clearing that would soon prove to be that of Theodore Roosevelt. This was ten years before Roosevelt would become president. Beaver Dick and Teddy hit it off and spent a pleasant evening swapping hunting stories in Roosevelt’s tent. Ten-year-old Emma hovered around the story-telling and began to make herself a pest.

Emma wrote about the memory in later years:

“At last, father got so provoked he stood up and pointed to the tent flap and ordered me to “pike away!’ I knew what that meant. But as I rushed past Mr. Roosevelt who was a short man and sat with his boots outstretched, I stumbled over his boots and fell on all fours. Before I could get back on my feet, Roosevelt reached down and pulled me across his lap, and then with his opened hand he gave a good spanking on my bottom side up.”

Emma felt bad about it, but apparently, Roosevelt did, too. The next day he asked her to show him how well she could shoot. With a rifle he handed her, Emma hit the bullseye on a target.

Emma said, “I heard Mr. Roosevelt shout ‘Bravo!’ It was the first time I’d heard that word but I knew it meant something good. And the best was yet to come. Mr. Roosevelt called me by name. ‘Emma,’ he said, ‘I hereby present you with this rifle and hope it will ease some of the pain I caused you last night.”

I’d heard this story from an elderly family member of mine but wondered about its veracity. Emma was named after my great-grandmother, Emma Thompson Just. I thought it might just have been a good spin on a lesser story passed down through the years. The story seems to be true, though, and is mentioned in many accounts of Beaver Dick’s life, the most authoritative of which may be the 1982 book Beaver Dick, The Honor and the Heartbreak, by his great-grandson William Leigh Thompson and his wife Edith M. Shultz Thompson. The quotes from Emma were found in that book.

Beaver Dick fought in the Mexican War and searched for gold in the Salmon River before establishing a ferry across the Boise River to supply Idaho City prospectors. As a soldier, trapper, prospector, rancher, ferryboatman and guide for eastern hunters, he facilitated the West’s shift from territory to settled area to tourist attraction.

(click image for larger size)
Richard “Beaver Dick” Leigh with his son William ” Bill ” Leigh. Richard was married to ” Sue ” Susan Tadpole (Bannock tribe) with whom he had three children, William Bradhurst, Rose and Emma.
photo courtesy of Michael Hague – “Richard was a friend of my Great Grandfather William A. Hague b. 1854 d. 1916”

A History about Beaver Dick

Harold Forbush – The Upper Snake River Valley Historical Society located on North Center Rexburg, Idaho is pleased to place on a C-90 cassette a live tape recording which was done originally on reel to reel tape and now it is been referred to as the Beaver Dick or Richard Lee family tape and now is being transferred on to the cassette this the 23rd day April 1984.