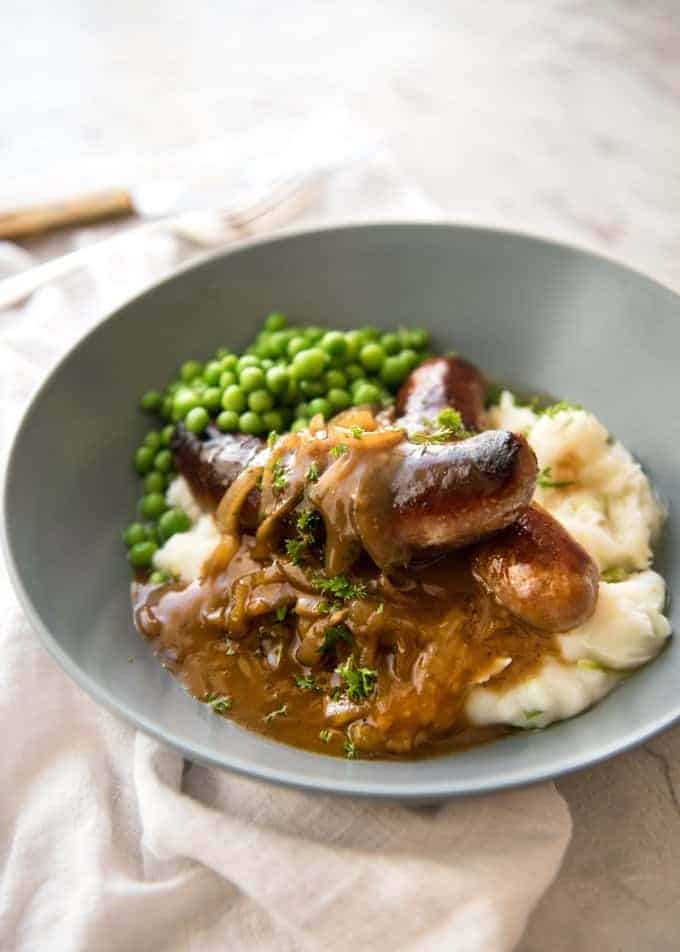 Sausage with Gravy – affectionately known as “Bangers and Mash” to Aussies and Brits – is one of the most epic of all comfort foods.
Servings: 4

Heat oil in a large skillet / fry pan over medium high heat. Add sausages and cook, turning, until browned as much as possible all over and cooked through. Cook time will differ depending on sausage size – mine take around 8 minutes.

Remove sausages onto a plate. Turn heat down to medium.

You need around 2 tbsp oil left in the skillet. If you have much less, add a bit of butter or oil.

Add onion and garlic, cook until golden brown – around 4 minutes.

Add flour and mix through.

Simmer, stirring, until the gravy thickens but is slightly thinner than you want – it will thicken more as you serve it. Season with salt and pepper.

Serve sausages with plenty of gravy, with mashed potato and peas on the side.

1. You can use any sausages you want. I used beef in some of the photos and pork in the video. However, if you use low fat sausages, they will not drop as much juice and fat when cooking so the gravy will not be as tasty.

2. I like to add onion because it adds more flavour to the gravy and also fills it out. But it is optional – you can skip it if you want.

3. I really like making my gravy with beef rather than chicken broth because it has a more intense flavour and it gives the gravy a nicer deep brown colour. But you can use chicken if you prefer – the gravy will be a lighter colour.
—————————–