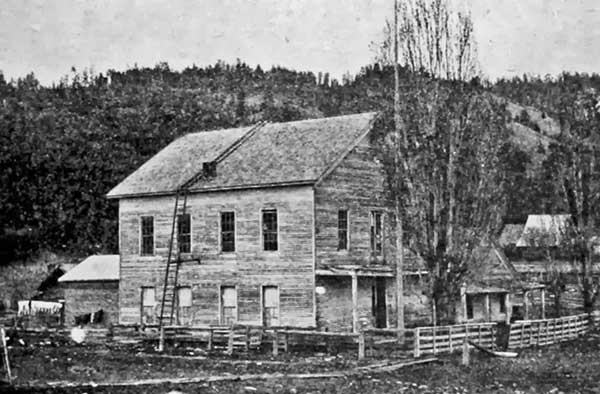 By 1875 Mount Idaho was developing into a prosperous town. Built largely as a stop for traffic to the gold fields, it seemed destined to be a more permanent settlement than the boom towns. It won a special election in 1875 for county seat. Mining was spreading to other areas: Orogrande, Dixie, Newsome, Salmon River, Golden, Marshall Lake, Burgdorf and others. Seventeen mining districts existed at that time, according to the Bicentennial Edition of the Idaho County Free Press published in 1976.

Several days ago a large number of the citizens of Idaho County met at the courthouse at Mt. Idaho to take steps to organize the Idaho County Pioneer Association. The meeting was called to order by Hon. L.P. Brown, and J.H. Robinson elected chairman and M.H. Truscott secretary. The secretary was instructed to prepare a paper setting forth the object of the association, and twenty-seven citizens signed the same. A committee of six was appointed to draft a constitution and by-laws to govern the same. The chair appointed K.W. White, B.F. Morris, W.C. Pearson, J.G. Rowden, J.J. Manuel and M.H. Truscott as such committee. Moved and carried that all persons who were residents of Idaho County prior to June 13, 1877, are eligible for membership. The meeting then adjourned to meet again at the court house at Mt. Idaho, on Saturday, August 6th, 1887, to consider the constitution and by laws, and to effect a permanent organization

According to a dispatch to the Spokesman-Review, Charles Frush is confined in the Idaho County Jail charged with the perpetration of Tuesday night’s stage robbery, and Sam Hurley is detained at Grangeville as an accomplice. Their examination will be held today and the officers say they undoubtedly have the right men. A letter found by the sheriff’s posse near the scene of the robbery, with other discarded letters from the mutilated mail sack, led to the arrest of the men. The letter bore the address of Frush and proved to be one sent to him the day before by the Grangeville vigilance committee instructing him to leave town.

“I have 2 consecutive week issues. Their motto was “No cash No paper”. Editor was Frank J Parker. Subscription $5 /year paid in advance. Not sure how long it was in existence, probably not long.

The Mount Idaho Radiator pre-dated it in 1873, but it didn’t last long either. From my personal collection.”

The County seat of Idaho County now has a newspaper, a very creditable publication called the “Mt. Idaho Mail”. The paper says that precinct will this year cast the largest republican vote in its history. That is likely to be true of practically all precincts in the state.

This was one of the fine old homes built at Mount Idaho in the community’s heyday and abandoned when the town died. The picture was taken in May of 1911, when only a relatively few people remained.

Idaho Town That Once Teemed With Life, Now Deserted

Once of the center of activities in Idaho territorial days, Mt. Idaho, established in the late fifties, was the mecca for thousands of people from all parts of the great Pacific northwest. It was for many years the county seat of Idaho county and radiating in every direction was the great mining camps of central Idaho. IN the Elk City, Florence, Warrens and other mining camps’ boom days, Mt. Idaho was the supply point and the village was the chief objective point of strangers. Territorial conventions brought many of Idaho’s most active citizens and it was there that the first territorial convention was held in 1861. With the removal of the count seat to Grangeville in the eighties, Mt. Idaho’s importance as a trading center waned and year after year it deteriorated until now nothing is left but dilapidated structures built during pioneer days, occupied yet by many of its pioneer residents.

One of Idaho’s Oldest Hotels

Every pioneer of note in Idaho from territorial days onward is acquainted with L.P. Brown’s hotel, a structure built at Mt. Idaho in 1859. It was regarded as one of the most palatial hostelries in the west during those early periods of central Idaho mining activities. Political leaders of every party have honored the hotel with their presence. Not a few of the best citizens of Oregon, Montana, Washington and California have occupied quarters there during those early days. It was built and owned by L.P. Brown, a gentleman of culture who was among the first settlers at Mt. Idaho. He had a host of friends and a disposition that warmed to him anyone who chanced to accept his hospitality. He was the owner of the town site and because of his difficulty with merchants who desired to purchase property, which he held high, Grangeville was born and ultimately he saw the historic town which he established dwindle to a mere way station. Many a political plot was hatched within its walls in territorial days. The hotel still stands a monument to his energy and is the chief building remaining at Mt. Idaho. Though with not its old time popularity, the place is still maintained as a stopping place by those chancing to pass through the old village. Brown died in the nineties. 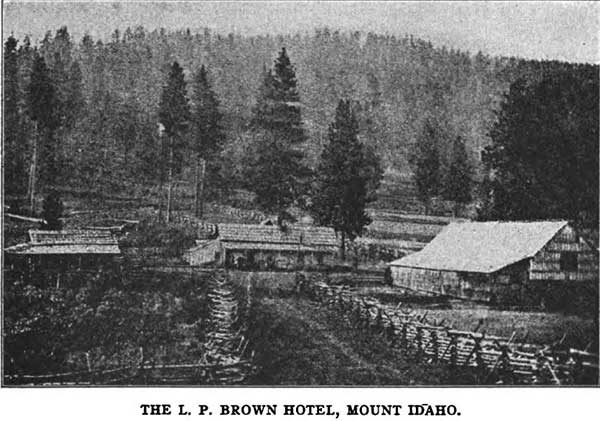