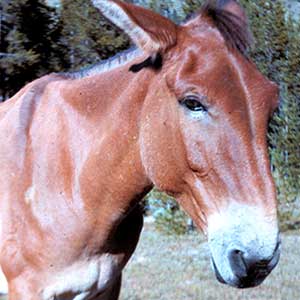 “This is Kennedy, the most gentle, strongest creature I have ever known. [H]e once had over 10 kids on his back at one time and never even flinched. I don’t know exactly how big he was, but you can see in the one photo he dwarfs my 6’2″ Dad [Big John Gillihan].

When our truck was stuck in mud to the axles, Dad hitched up Kennedy and he pulled it out with no effort. When he died, he was immortalized in the press by Jerri Montgomery, who told his story. He was unforgettable to all of the kids who ever met him and all of the hunters he packed for. My Dad loved this mule, and so did we all.”
by Kristy Gillihan Scaraglino
— — — — — — — — — —

“I was riding Kennedy one time, leading a pack string back from a camp out of Cold Meadows, in the summer time and met a group of back east sight seers, they thought I was quite a sight! They stop me and ask to take my picture, I would give anything to see those pictures! …”
by Milton Gillihan
— — — — — — — — — — 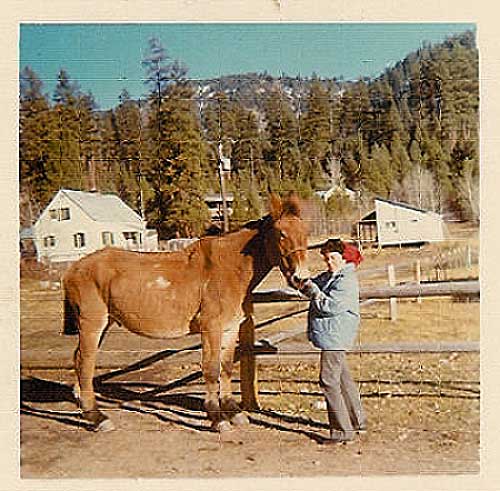 I told a fellow that Kennedy’s head was bigger than a 55 gallon barrel. Proved it by putting some grain in the bottom of an empty barrel and when the mule ate the grain, his ears were still sticking out the top.
— — — — — — — — — —

by Jerri Montgomery November 1976 [The Star-News]

The anniversary of 20 years of guiding and packing in Big Creek area, 20 years of coming to Yellow Pine, by the Gillihans. These years touch the family from young Pat up to Jack. The rough years of herding their stock all the miles into [unintelligible] camp country, taking care of hunters, some on this type of a trip for the first time, wrestling stock in the cold of the early a.m., finding the lost, babying the tenderfoot, trailing lost stock, reaching camp late, cold, hungry, to have to pacify a group of hunters who saw the game and could not shoot straight enough to hit, or hit and lost game, holding their tempers to the best of their ability as the moans and groans of the poor sport hit their already frost bitten ears.

Twenty years of the final job of moving stock out of Big Creek Basin through Yellow Pine and out to Cascade on horse back. This clan arrived in Yellow Pine with beards stiff with ice, their clothes wet and frozen, eyes red and heavy with weariness. Yet they would stay on their feet to mingle with us until there was just no more ambition for anything else but bed.

Big John, the patriarch of this family started the work, sons following the big man’s beginnings. There have been the changes. This year, for the first time, the Gillihans brought their stock out in trailers and stock trucks over bare ground, arriving in Yellow Pine clean shaven. Progress has hit this clan. No longer will we hear the cowboy yell as the men herd the horses and mules through the main part of this village. It was then this crew stopped, as the cowboy of old at the end of the trail, to have a high ol’ time for a day or so in Yellow Pine. This year Jack stopped to adjust a problem with horses, then walked to his truck, waved and called, “see you next year”. Ray Gillihan we saw once. Young. Pat is no longer the youngster, he is 19.

Then too, the, Gillihans have suffered a great loss. Their great mule, Kennedy, has died at 19 years of age. No more will the big hybred tread the mountain trails he knew so well. Kennedy died far from the mountains that challenged his tremendous strength, in a bog hole on the flat lands. This mule held the title of the largest mule in this area and even farther away. Yet the big animal wasn’t just a mule. He was strong, gentle and intelligent. He had a mind of his own and was respected for this. A small child could walk under his body without fear. He could outwit anyone in his search for oats or hay and out-eat three other horses or mules. Kennedy will live for many a year as a legend. There will always be someone who will bring Kennedy back when the tales are told around a campfire. And who knows, maybe Kennedy will be standing outside of the fire’s glow, munching on a bale of hay, listening to the words of praise.

This an obituary for a mule this person admired. Why not? This animal was part and parcel of the Gillihan clan. The mule played a large role in the business of packing and guiding. He worked hard and faithfully. In doing his job, he gained fame of sorts. Kennedy was and is the greatest animal this back country has known. Aye, he will live on and on and walk the mountains with the Gillihans in the years to come.
— — — — — — — — — —

Kennedy in the field 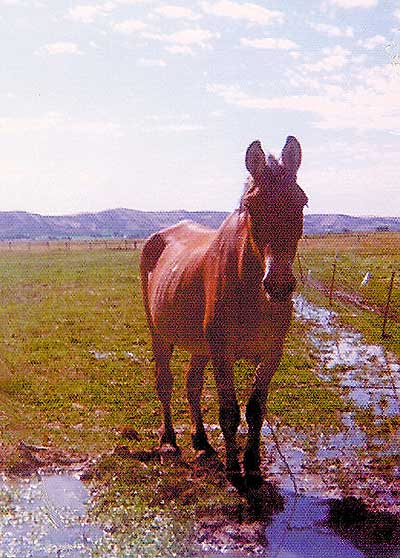 Notice the “bells” cut in the mule’s tail in the photo of John packing Kennedy? Here is a closeup.

Tale of the Tails

“Dad got three mules from a Basque Sheepherder in Mountain Home, and they had bells cut into their tails. Their names were Freddie, Jenny and Sad Sack. Dad found out the sheepherder was mistreating them and had beaten Sad Sack so badly with a 2×4, that his ribs were broken. Roy said Sad Sack was never good as a pack animal and he didn’t like people, but Freddie and Jenny turned out to be good mules.”
– by Roy Gillihan

Freddie and Jenny I used quite often, but Sad Sack I didn’t use unless absolutely necessary! He was a temperamental sort!
– by Milton Gillihan

Not everyone agrees on the meaning of the bells, however, the following is an interesting story.

The tale of mule tails goes back to the US cavalry, who used mules more than horses during the 19th C. Mules have a particular way of thinking and if you cross the line, expect an instant reaction! Think of ‘Stubborn as a mule’; ‘Kick like a mule’; ‘Work like a mule’. Mules do things their way and that’s that. And they won’t meet you half way … maybe 25% of the way, if you ask nicely. So the US cavalry developed a system to identify what you’re up against and cut a mule’s tail in the shape of bells as a signal to all and sundry.

A green (or young/inexperienced) mule had its tail shaved. By the time the mule was broken in to carry a pack, a ‘bell’ was trimmed into its tail. Once broken in to draw a cart a second bell was added. And the pinnacle of success, once broken as a saddle mule, a third tassel or bell was added. Get the picture?

When a new mule-skinner arrived in the yard he knew which mules to approach for a particular job. You could look at a corral full of unknown mules and find your perfect partner, avoiding any loss of blood.