Mules which will be used in a pack train to Los Angeles advertising Idaho’s tourist possibilities are lined out by Don Lee of Idaho Tourist Enterprises of Boise. The train will leave Boise May 20 [1959] and will take about 100 days to Los Angeles. Lee will pass out information on Idaho on the way.
— — — — — — — — — —

Don Lee of Idaho Tourist Enterprises, Boise, will bring back memories of the old Wild West when he leaves Boise May 20 with a mule pack string that will advertise Idaho as a tourist playground all the way to Los Angeles. With Lee will be Mr. and Mrs. Frank Perkins, outfitters and guides in the Selway area of the state.

The 100-day journey from Boise will take the mule train through Nampa, Caldwell, Marsing, Winnemucca and Reno, Nev., and on to the California cities, Sacramento, San Francisco and Los Angeles.

“We plan to carry pamphlets, movies and colored slides to advertise the attractions of this state,” Lee said. “If merchants contact us, we’ll carry sample packages of Idaho produce for distribution.”

At towns along the way Lee and his helpers will give shows and lectures advertising Idaho’s lakes, fishing streams, resorts, and big game areas.

“We will offer to prospective tourists,” Lee stated, “vacation plans tailor-made to fit the needs and wishes of specific families. None of this general stuff. We intend to tell Pa and Ma and the kids exactly where to go to find fishing, hunting, photography, or just grand scenery. Through our company, Idaho Tourist Enterprises, we will make all all arrangements for them, even to booking reservations for hotel, cabin, or guide service.”

Lee is an Idaho enthusiast who began work and research in 1953 for this project to bring more tourists to Idaho. Six years an outfitter and guide for Hell’s Canyon and Seven Devils in the Salmon River mountains, and on the headwaters of the Selway, he is well qualified to urge tourists into the wilder areas of Idaho.

Mr. and Mrs. Perkins are experienced stock people, who take pack strings up the Selway river from Selway Falls. Perkins operates a trucking business with his outfitting and guiding. 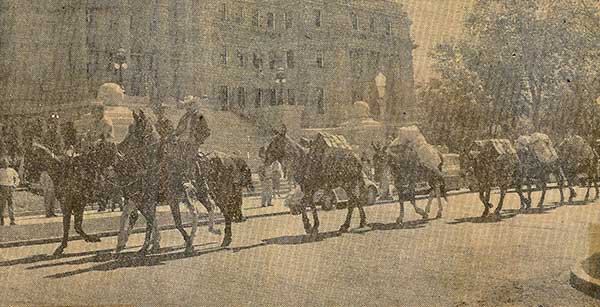 A mule train and three riders started from the Capitol building Wednesday. Riders heading the train for the first lap are, left to right, Frank Perkins of Weiser, Don Lee and John Gillihan, both of Boise. The mule train is a promotion of Idaho Tourist Enterprises. Films will be shown and literature distributed all along the way to Los Angeles. The party camped outside Meridian Wednesday night and will be in Nampa today and Caldwell Friday. The train will trek to Marsing and then be trucked to Jordan Valley. Trucks will carry the train between Jordan Valley and Winnemucca and Winnemucca and Reno, but from there on to Sacramento, San Francisco and Los Angeles the journey will be by hoof at about 25 miles a day.
— — — — — — — — — —

Reno, Nev. — The Idaho mule pack train, on a journey from Boise to Los Angeles to advertise the Gem State’s tourist attractions, has arrived in Reno, train captain Don Lee reported by mail to The Statesman Tuesday.

Lee, an Idaho hunting and fishing guide, said he will present a letter to Governor Sawyer of Nevada tomorrow, inviting the governor to a hunt in the Idaho primitive area. Lee said the mule train was on display at Dick Graves’ Nugget club in Reno Sunday.

Carson City, Nev. AP – An Idaho mule train clip-clopped onto the capitol grounds Wednesday to deliver an elk hunt invitation to Gov. Grant Sawyer. Then it headed west for a similar call on Gov, Edmund Brown of California.

The five pack mules, herded by two horsemen, had been on the road from Boise 21 days. Chief Mule Skinner Don Lee said he estimated it would take 40 more days to wind through Sacramento, San Francisco and Los Angeles.

Lee is conveying Idaho Gov. Robert Smylie’s invitation to Sawyer and Brown to join him in an elk hunt in the Chamberlain basin when Idaho’s elk season opens Sept. 15. 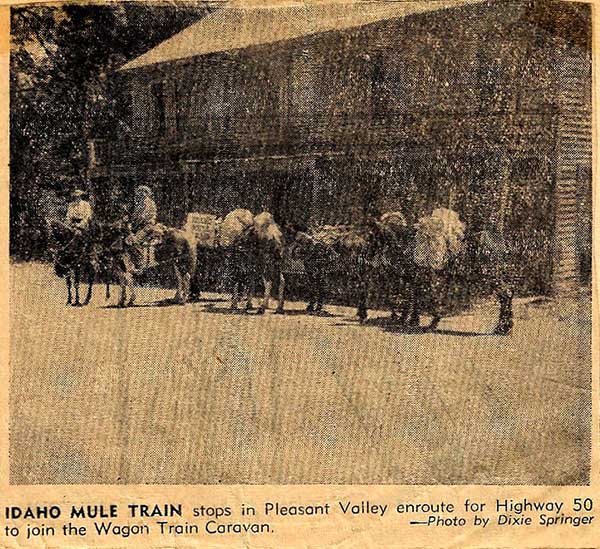 It was the Idaho pack mule train that went, through Placerville two weeks ago. Then, it was en route to the state capitol with a letter for Governor Brown from the governor of Idaho. Now, it was on its way back through Pleasant Valley and on by Sly Park to join the local Wagon Train on Highway 50.

In Pleasant Valley, the train reined up before the 100-year-old Hughes hotel as did many a trail weary teamster in the days of yore. The mule drivers were Don Lee, trail boss, and John Gillihan, of Boise, Idaho. The third member of their party is Susie Estolow of El Dorado. She states her plans as staying with the train until it arrives in Placerville with the Wagon Train.

The mule train (six mules, two horses) left Boise, Idaho, on May 20, its destination Los Angeles. It first passed through Placerville on June 16, bound for Sacramento. Leaving there, mission accomplished, its next stop was Jackson and then back to El Dorado and Diamond Springs. They have hit all the celebrations in the various communities that they could.

Following the Wagon Train celebration in Placerville this weekend, the train will leave for San Francisco, then go down the coast, time permitting, to Los Angeles. Another letter is to be delivered – this one to Bing Crosby, from a former schoolmate, Sib Kleffner, of Boise, Idaho.

Principal purpose of this several-months long trip is to create interest, especially among sportsmen, in pack trips in Idaho.
— — — — — — — — — — 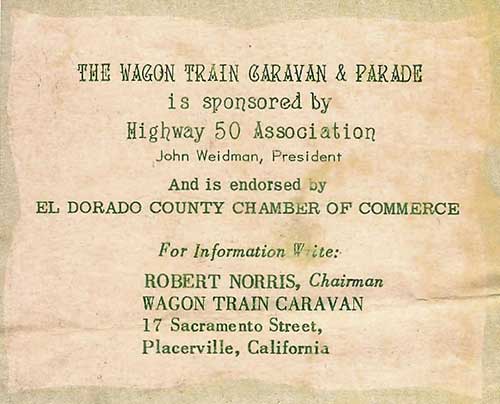 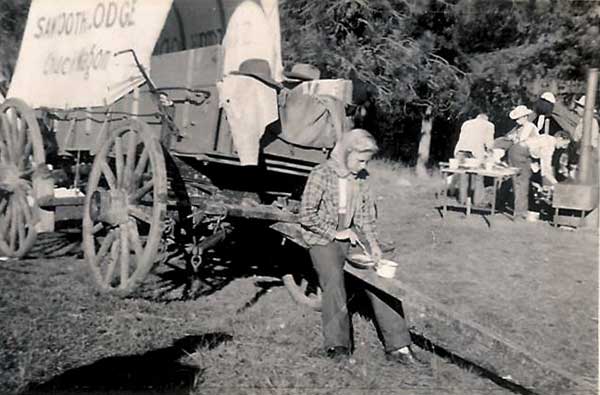 John Gillihan, 406 E. 40th, veteran Idaho guide and packer, has joined the Boise-to-Los Angeles mule train at Sacramento and will remain until the pack string gets to San Francisco. Gillihan and his son, Bob, pack for Grand-Jean Sawtooth Lodge on the South Fork of the Payette River.
— — — — — — — — — —

Dad [Big John Gillihan] in a parade in California in his honor. He and a group of others rode their horses and took a packstring all the way from Boise to California in 1959. It was called “The Idaho Mule Train”

Many thanks to Kristy Gillihan Scaraglino for sharing the family scrapbook.
——————-