Robert McRae (left) with daughter Lorie, son Robin, and the children’s grandfather, Daniel McRae, displaying a plaque dedicated by the citizens of Stibnite to people interred at the flooded town of Roosevelt. (photo courtesy Sandy McRae and Jim Collord)
— — — — 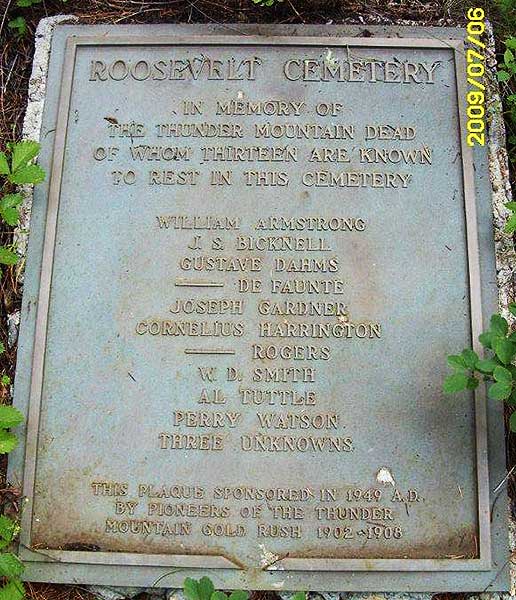 Gustave Dahm
Idaho County Free Press, March 17, 1904
The county auditor received a letter stating that since the snowslide at Thunder Mountain, known as the Henderson slide, it is almost certain that Henderson had a visitor, and to date neither of the bodies have been found. On the 14th of February two prospectors were frightened and left their cabin and started for Roosevelt, one of them returned the following day. On the 16th it was reported that the cabin was gone. Searching parties started out and after making three tunnels in the snow for a considerable distance discovered the body of Gustave Dahm, a German. His funeral was held at Roosevelt the 17th of February.
— —

Lorenzo DeFonte (DeFaunte)
Idaho County Free Press, August 10, 1905
Reported shooting affray at Roosevelt last week proved correct. but instead of Thomas Neighbor it was L.(Lorenzo) DeFonte, an Italian who was killed. He was killed by a man named West over trouble with the latter’s wife. West was given a preliminary trial and turned loose.

Idaho County Free Press, August 31, 1905
West Re-Arrested – Will be Brought Here On Charge of Murder
J.E. West, who shot and killed Lorenzo Defonte at Roosevelt, has been again arrested at Mountain Home and the sheriff left Tuesday to bring the prisoner here for trial. At the time of the killing of DeFonte, West was given a hearing at Roosevelt and turned loose, but investigation indicates that the preliminary was conducted by West’s friends and the true facts of the case were not brought out.
The trouble arose over a woman who West claimed was his wife but who was rather promiscuous in the bestowal of her affections.
— —

Perry Watson
Idaho County Free Press, February 14, 1907
Killed in Snowslide – Perry Watson Caught in Rush of Snow Near Roosevelt
The following telegram was received at the sheriff’s office the first of the week: “Knott [Knox?], Idaho February 11, 1907; To Sheriff, Grangeville; Perry Watson killed in snowslide 21 miles south of Roosevelt. Please inform Tom Watson and other relatives… J.A. Gardner”
From local parties it is learned that Perry Watson was a brother of Tom Watson, who lives over across Salmon River. Perry Watson was a miner and owned some valuable property in the vicinity where his life was lost. It is supposed that he was at work on this property when the slide occurred. News concerning the particulars of his death, other than contained in above message could not be learned. Watson was well known in Roosevelt and surrounding camps. 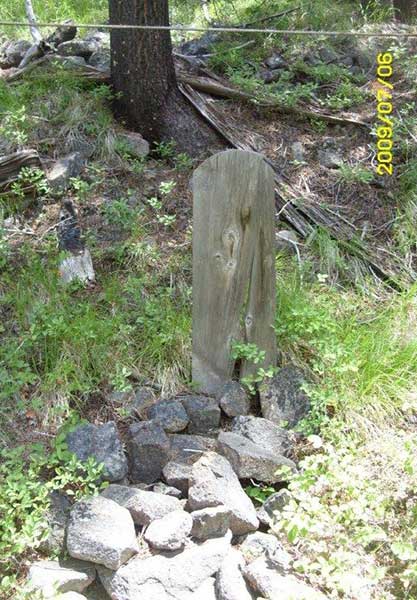 The graves were buried on a patented claim call the Massenet. The patent was let in 1902 or so. The Dewey owners filed the papers. The owners of the Dewey in the late 1930s sold the claim to Bradley mining co. The company decided they did not need the Massenet in 1944 so offered to sell it to my dad. He bought it for 50 dollars and the McRaes owned it till 1982. We sold it to a fellow from Challas and they after 4 or 5 years sold the 19 acres to the Forest Service and it went in to the Wilderness area.

Founded late in the fall before the big rush to Thunder Mountain in the beginning of 1902, Roosevelt soon became the leading camp in the new mining district. Thousands of men, having heard that Thunder Mountain was destined to be the biggest gold producer in the country, poured into Roosevelt and the Monumental Creek area. But actual production did not begin to match expectations, and although the Dewey mine stayed in production until 1907, Roosevelt did not become the big center its promoters planned. Relatively little activity went on after the Dewey mine shut down, and in the winters especially, not many people remained there.

Before the spring population returned in 1909, a large mud slide blocked Monumental Creek below the town, May 30. (Slides such as this were typical of that part of the country: the Roosevelt slide resulted from heavy spring rains, and not from mining activities.) Lasting for two days or so, the slide grew large enough to back up a new lake which flooded the town, and Roosevelt had to be evacuated. For the next twenty years or so, buildings floated around in the lake; but as the years went by, they fell apart, and now there are only a lot of boards cast about in the water.

In recent years, the level of the lake has been declining, but the townsite still is under water. Roosevelt and the other Thunder Mountain towns have all been deserted for years, and by 1962, there were only two inhabitants on the whole of Monumental Creek, compared with the horde that rushed in there only sixty years before.