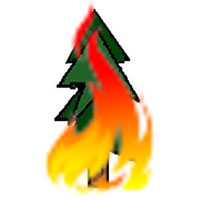 The fire is burning in standing dead and down timber and sub-alpine fir with short-range spotting south and east toward the Frank Church River of No Return Wilderness. Fire officials are coordinating with the Salmon-Challis National Forest which has management responsibility of the wilderness area.
InciWeb link:
Link: to current heat detection map
— — — — — — — — — —

McCall Ranger District, Porphyry Creek drainage, 2 miles SW of the bridge – estimated 1300 acres, no safe access at this time for fire personnel. The fire is burning actively under dry and windy conditions. The fire has moved over the ridgeline and has the potential to impact Porphyry trail, trail #003 near Mosquito Ridge, the Rattlesnake trail and the South Fork trail. The public is asked to stay cognizant of the fire and remain clear of the area, however no closures are in effect at this time.
A return to seasonable temperatures has brought an increase in fire behavior. The Porphyry Fire has grown to an estimated 1300 acres as of a 4pm reconnaissance flight today. There was minimal fire growth through today and smoke has created an inversion and minimized activity. The fire continues to move to the South towards the North Fork of Wolf Fang Creek. The fire is expected to remain active through the weekend as an unstable air mass enters the region bringing gusty winds and Red Flag Warnings.
InciWeb link:
Link: to current heat detection map
— — — — — — — — — —

Today Widespread haze. Sunny and hot, with a high near 91. Breezy, with a light southwest wind becoming west 15 to 20 mph in the afternoon. Winds could gust as high as 29 mph.

Tonight Widespread haze. Clear, with a low around 53. West wind 9 to 14 mph becoming light west northwest after midnight. Winds could gust as high as 23 mph.
——————-