Bake 25 minutes. Increase temperature to broil, and broil until a meat thermometer inserted into thickest portion registers 140F, about 5 minutes. Transfer pork to a serving platter, and cover with foil. Return pan to oven, and broil squash mixture until slightly charred, 3 to 4 minutes. Transfer squash mixture to a serving bowl; toss with remaining 1/2 teaspoon salt, and serve with pork.

4 servings
These grilled pork ribs are all about the sauce. This stir-together gochujang sauce has everything you want—heat, sweetness, and palate-gripping acid—but with extra tang. Try this glaze on: Boneless chicken thighs, pork shoulder steaks, or skirt steak.

Place a rack in middle of oven and preheat to 350F. Whisk vinegar, brown sugar, gochujang, and adobo in a medium bowl until sugar is dissolved. Transfer half of sauce to a small bowl and set aside for serving.

Season ribs all over with salt and pepper. Place each rack on a double layer of foil and wrap up. Set on a rimmed baking sheet; bake until very tender but not falling apart, 2 1/2–3 hours. Let cool.

Prepare a grill for medium-high heat; oil grate. Grill ribs, turning several times and beginning to baste with remaining sauce as soon as ribs begin to brown, until charred and coated with a thick layer of glaze and heated through, 8–10 minutes. Transfer ribs to a cutting board and cut between bones into individual ribs. Serve with reserved sauce alongside.

Prepare a grill for medium-high heat; lightly oil grate. Pat pork chops dry and season generously all over with salt and pepper. Place on a rimmed baking sheet and let sit at room temperature at least 30 minutes and up to 1 hour.

Meanwhile, toast coriander seeds in a dry small skillet over medium heat, tossing often, until golden brown and fragrant, about 2 minutes. Transfer seeds to a cutting board and let cool. Using a flat-bottomed mug or a heavy skillet, lightly crush. Place in a small bowl and add vinegar, sugar, and 1/2 cup oil. Season with salt and pepper and whisk until sugar and salt are dissolved. Set marinade aside.

Toss jalapeños and 1 Tbsp. oil in a small bowl to coat; season with salt and pepper. Pat pork chops dry again (the salt will have drawn out more moisture) and rub with remaining 2 Tbsp. oil. Grill jalapeños, turning often, until softened and blackened in spots, about 5 minutes. Transfer to a cutting board. Grill pork chops, turning every 2 minutes or so, until cooked through but still medium-rare closest to the bone (an instant-read thermometer inserted near the bone should register 145°), 8–12 minutes. Transfer to cutting board and let rest 10–15 minutes.

Cut pork along the bone to remove meat in one piece; slice 1/2″ thick and transfer to a rimmed platter. Slice jalapeños crosswise into rounds and scatter over pork. Pour reserved marinade over and let sit at least 15 minutes and up to 1 hour before serving. To serve, scatter onion over.

A spice mill or mortar and pestle; twelve to sixteen 8″ metal skewers or soaked wooden chopsticks or bamboo skewers

Freeze pork on a rimmed baking sheet until very firm around the edges, 45–60 minutes. Remove pork from freezer and slice as thinly as possible. Slice pieces lengthwise into 1″–2″-wide strips.

Meanwhile, combine onion, chiles, garlic, Sprite, soy sauce, vinegar, sugar, peppercorns, and 1 Tbsp. salt in a large resealable plastic bag. Grind mushrooms in spice mill or with mortar and pestle to a powder; whisk into marinade. Add pork a few pieces at a time, coating well so they don’t stick together and can evenly absorb marinade. Cover and chill 6–8 hours.

Prepare a grill for medium-high heat. Remove pork from marinade and thread onto skewers. Transfer marinade to a small saucepan and bring to a rolling boil on the grill. Cook 1 minute, skimming off any foam that rises to the surface. Move to a cooler part of the grill.

Season pork lightly with salt and grill, undisturbed, until well browned, about 2 minutes. Turn and baste with marinade. Continue to grill, turning and basting every minute, until cooked through and browned all over, about 4 minutes longer.

For the Barbecue Sauce:

If using a gas grill, preheat to high on one side; put soaked wood chips in a smoker box. Once smoking, reduce the heat to maintain a temperature of 275 degrees F and cook the pork, covered, on the cooler side of the grill.

Prepare the wood chips: Soak 6 cups wood chips in water, about 15 minutes, then drain. Don’t oversoak, or the wood will snuff out the fire.

Light the grill: Fill a smoker or kettle grill with charcoal and light. (Pat uses lighter fluid; you can also use a chimney starter.) When the coals are mostly white, spread them out with tongs. Spread 1/2 cup of the wood chips over the coals (use 1 cup for a kettle grill). The temperature of the grill should be about 275 degrees F.

Cook the pork: Place the pork fat-side down on a rack in the smoker or on the grill. Cover and cook, rotating the pork every hour or so, until a thermometer inserted into the center registers 165 degrees F, about 6 hours total.

Feed the grill: As the pork cooks, add more charcoal and wood chips to keep the temperature between 250 degrees F and 275 degrees F and to maintain the smoke level.

Make the sauce: Meanwhile, mix the ketchup, 1 cup water, both sugars, 1 1/2 teaspoons pepper, the onion and mustard powders, lemon juice, Worcestershire sauce, vinegar, corn syrup and 1 tablespoon of the reserved barbecue seasoning in a saucepan over high heat. Bring to a boil, stirring, then reduce the heat to low and simmer, uncovered, stirring occasionally, at least 2 hours. Let cool, then reheat on the grill when ready to use.

Shred the pork: Transfer the pork to a rimmed baking sheet (you’ll want to catch all the flavorful juices) and let stand until cool enough to handle. Shred into bite-size pieces, pile on a platter and pour any juices from the baking sheet on top.

Make the sandwiches: Mound the pork on bun bottoms, paint with a little barbecue sauce, top with slaw and cover with the bun tops. The best sandwich ever.
———————————

Place a Dutch oven or other large, heavy pot over high heat and add the oil. Season the pork generously with salt and pepper. Add to the pot and sear on all sides until browned, about 2 minutes per side. Add the onion, reduce the heat to medium and cook, stirring occasionally, until the onion is softened, about 7 minutes.

Add the jalapeño, garlic, chili powder, cumin, oregano and the 1/2 tsp. salt. Cook, stirring frequently, until the mixture is aromatic, about 3 minutes. Add the flour, stir to make a paste and cook for 1 minute more. Whisk in the broth and bring to a simmer. Add the carrot, potatoes, tomatoes and tomatillos. Cover partially, reduce the heat to low and simmer until the pork is very tender, about 45 minutes.

Using a slotted spoon, transfer the pork to a plate. Increase the heat to medium-high and continue to simmer the stew until thickened, about 10 minutes. Shred the pork with 2 forks. Return the pork to the stew and season with salt, pepper and hot sauce.

Ladle the stew into bowls, garnish with cilantro and serve immediately with tortilla chips. Serves 4

The ingredients are cut into bite-size pieces so that the distinctive flavors of the vegetables — tomatillos, tomatoes and carrots — shine through. When serving cheese aficionados, sprinkle each bowl with shredded pepper jack
—————————- 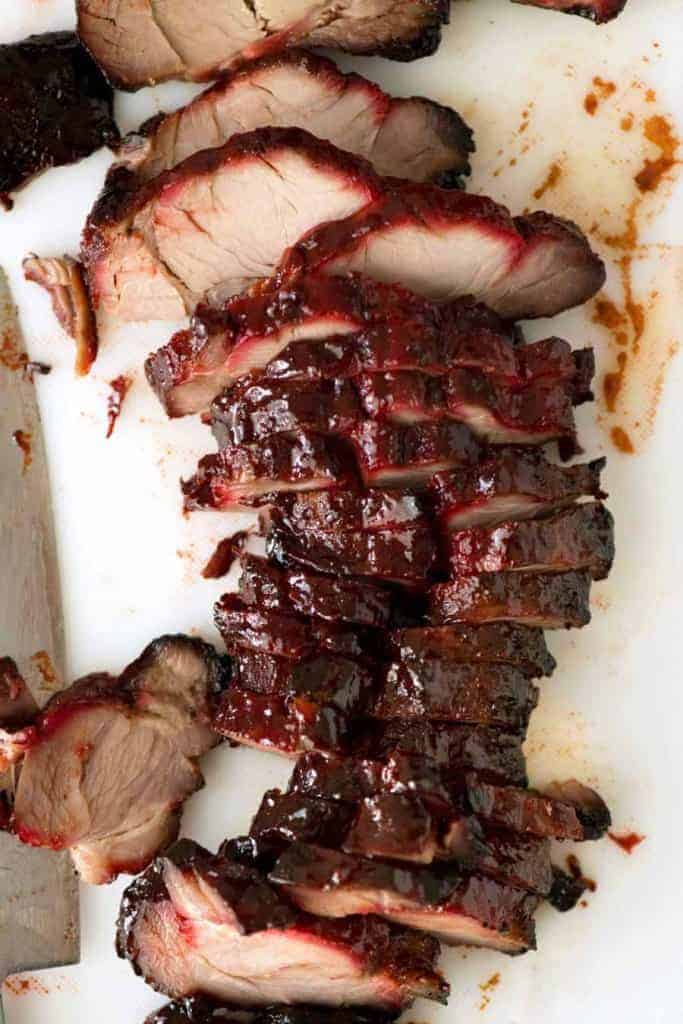 Mix Marinade ingredients in a bowl.

Place the pork and Marinade in a stain proof container or ziplock bag. Marinate 24 to 48 hours (3 hours is the bare minimum).

Line a tray with foil and place a rack on top (recommended but not critical).

Remove pork from the marinade, save Marinade. Place pork on rack.

Meanwhile, pour reserved marinade in a saucepan. Mix Extra Honey into marinade. Bring to simmer over medium high and cook for 2 minutes until syrupy. Remove from heat.

Remove pork from oven. Dab marinade all over, then turn. Baste then roast for a further 30 minutes.

Baste again on surface then bake for a further 10 minutes until caramelised and sticky. Meat should be tender but not falling apart, like with pulled pork. Allow to rest for 10 minutes before slicing.

1. The light soy sauce adds a touch more salt to the marinade, the balance I like. But it’s fine to use all light soy sauce or all ordinary soy sauce. Do not use dark soy sauce (flavour is too intense).

3. Or other neutral flavoured oil.

4. The red food colouring is to make the pork red, like you get at the Chinese barbecue shop. This is optional. Authentic Char Siu uses red bean curd for colouring and a touch of flavour – it can be found at Asian stores, use about 2 tbsp of the liquid and no red food colouring.

I use the marinade in this recipe more frequently than the authentic version because I can get all the ingredients at the supermarket and it has a slightly more intense flavour – makes up for absence of charcoal in this home version.

5. I used to make this with pork tenderloin (Note 6) but I’ve moved to scotch fillet roast and pork shoulder because they are ideal for longer cooking to get amazing caramelisation and the pork is incredibly juicy inside. Scotch fillet is also known as Pork Neck, Pork Collar or Pork Neck Collar. This is what Chinese BBQ shops in Australia use.

Pork shoulder is also ideal – beautifully juicy. If using pork shoulder, using boneless, skinless and trim off most of the thick layer of fat on the surface. Then cut into long thin pieces, like pictured in post with the scotch fillet.

You want thin slices about 1″ thick to get the best flavour penetration from the marinade.

Some people also make this using pork belly but I find that too oily for my taste for this particular recipe.

6. Pork Tenderloin cooking directions (photo here of how it looks): Roast at 350F for 25 minutes or until the internal temperature is 145 – 160F. Around halfway through roasting, baste generously with the reserved Marinade. Sort of dab it on so you get as much Marinade on the pork as possible – this is key for getting the thick, glossy glaze. Then flick to broiler/grill on high and broil for a few minutes until surface is charred and glossy, basting once or twice. 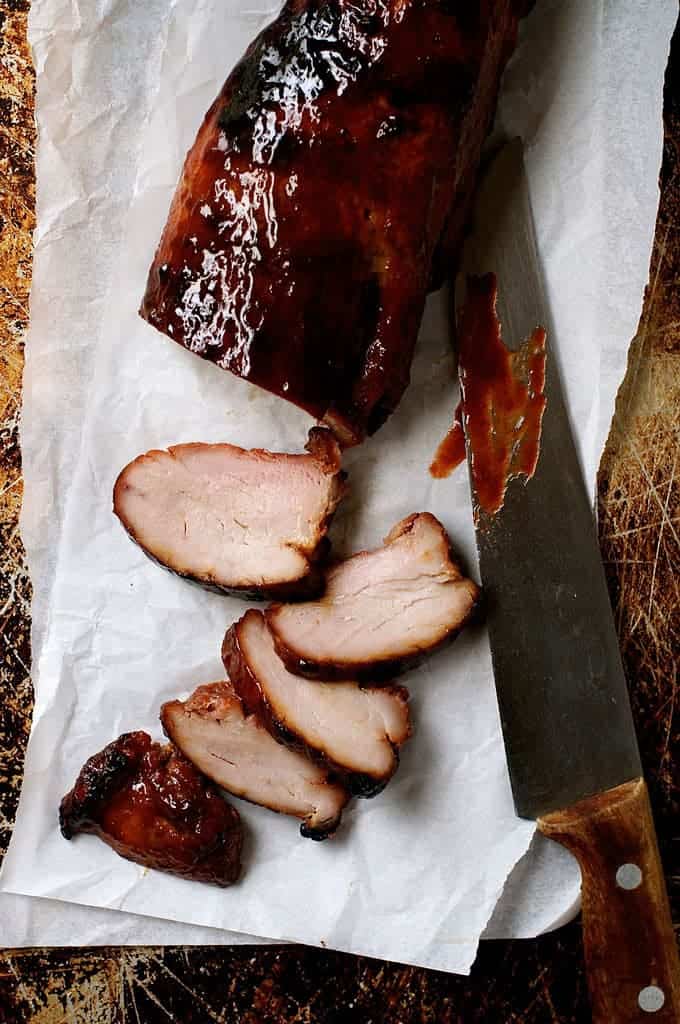