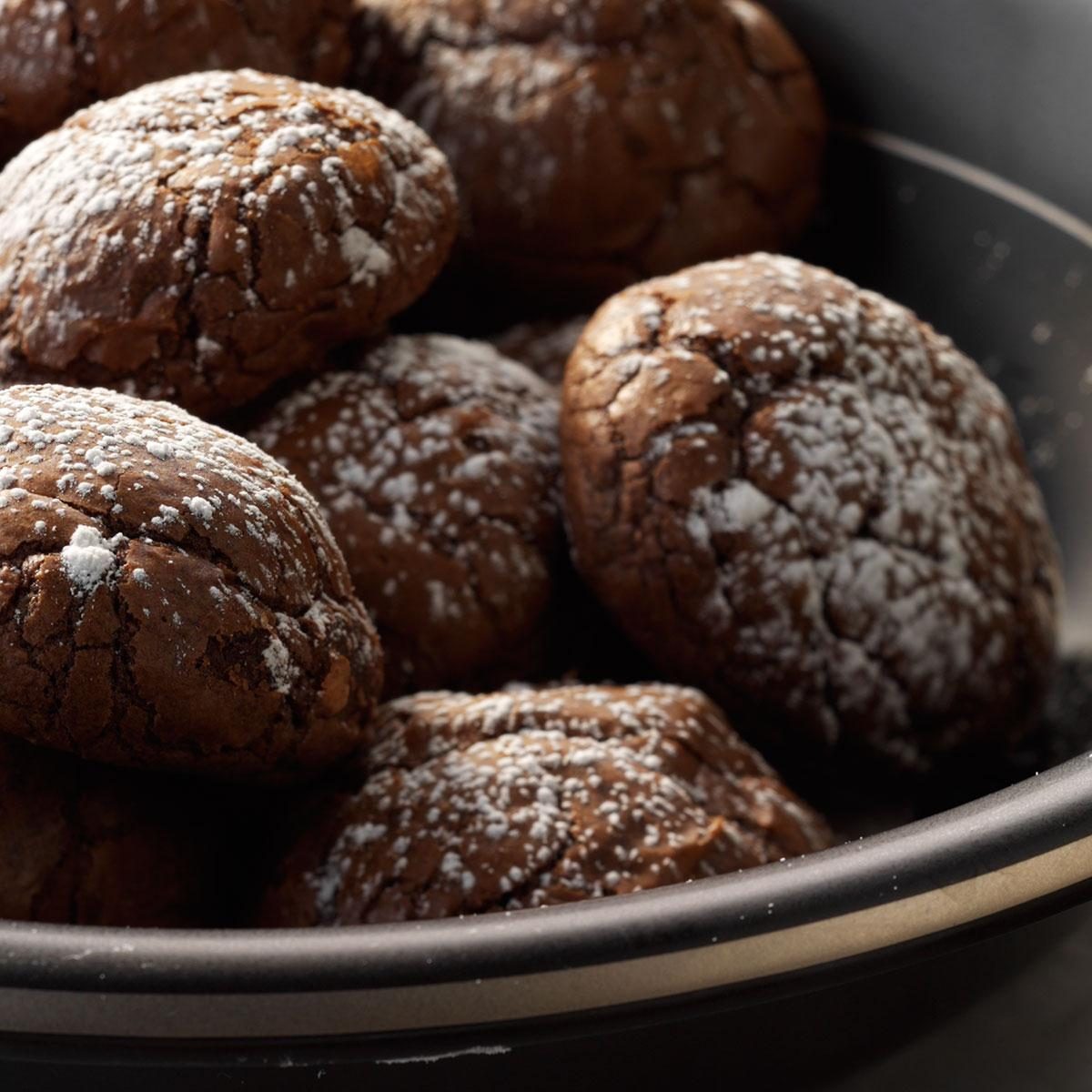 These enticing cookies are crisp on the outside and soft on the inside, somewhat bittersweet and very chocolaty.
Delaine Fortenberry, McComb, Mississippi
Makes about 4 dozen 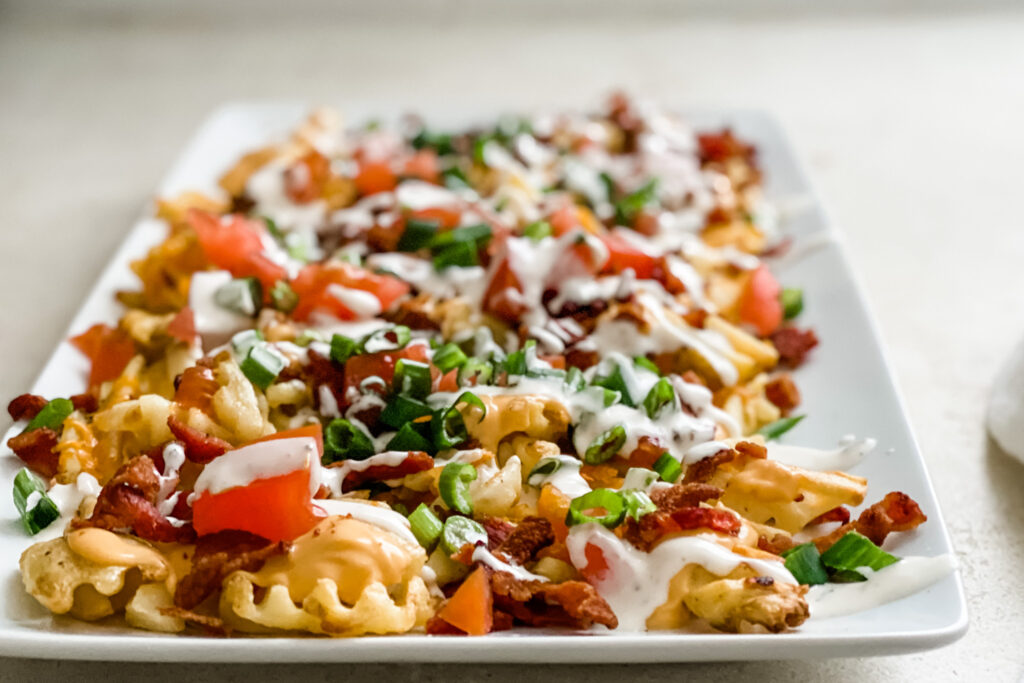 Begin with warming your fryer to 350 degrees F. Preheat the oven to 400 degrees F.

Fry the waffle fries until golden brown, 2 to 4 minutes. Then lightly dust with salt and place on a cookie sheet or metal pizza pan. Top with the cheese and bacon. Place in the oven until the cheese is completely melted, 2 to 3 minutes. Remove from the oven and finish by sprinkling on the tomatoes, green onions and sour cream.

Note: To cut the waffle fries, slice downward on the end of a potato with a crinkle cutter. Rotato the potato 90 degrees, and slice downward again. Repeat this process until the entire potato is sliced. This may take some practice to get the perfect waffle cut.
——————- 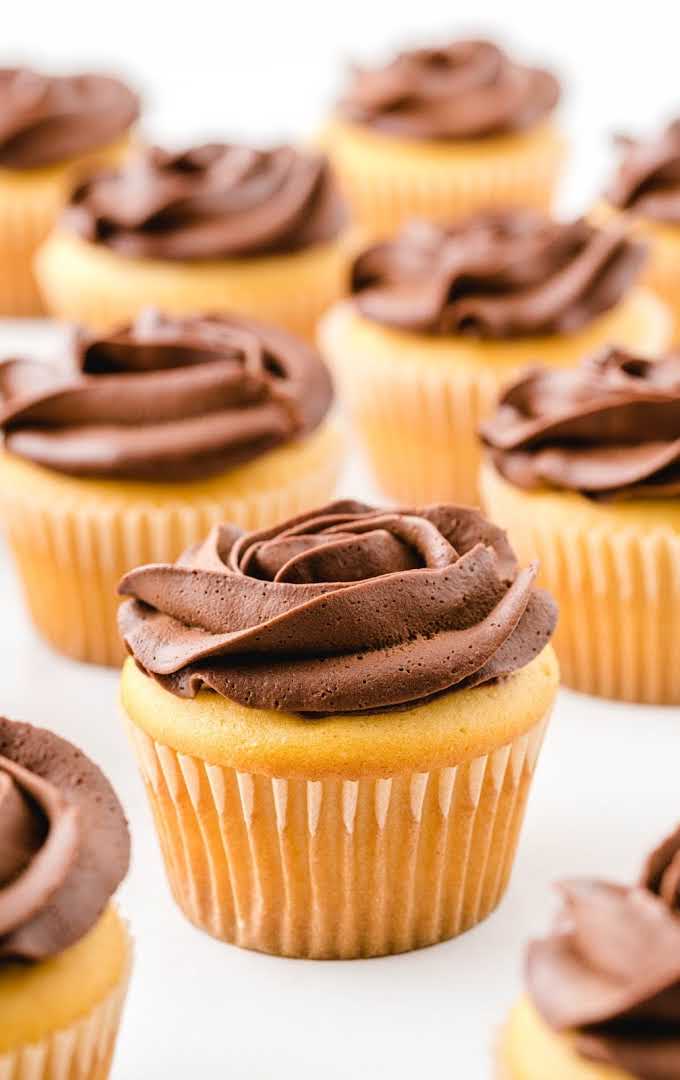 Preheat the oven to 350°F. Place paper cupcake liners into the cupcake baking tin and set aside.

Using either a stand mixer or a large mixing bowl and a handheld mixer on medium speed, prepare the cake mix according to the instructions on the back of the box.

Spoon the cupcake batter into the cupcake liners, filling them half full. Bake for 15-18 minutes or until the cupcakes are lightly golden and a toothpick inserted comes out clean. Allow the cupcakes to cool completely.

Leave the cupcakes in the cupcake liner, use a sharp knife or a large decorator icing tip, carefully core out only the center of the cupcake about the size of a quarter. Be careful not to cut too deep and cut the liner. Do not replace the tops of the cupcake. Leave them open for the cream.

Using a handheld mixer and a medium-sized mixing bowl, combine the heavy cream and the instant pudding mix. Beat on medium-low speed until the pudding starts to thicken. Cover with cling wrap and allow the pudding to chill in the refrigerator until filling the cupcakes.

In a heat-safe small bowl, heat the heavy cream for 2 to 2 1/2 minutes. It is essential that the cream is hot when poured over the chocolate chips.

In a medium-sized heat-safe bowl, add the 12-ounce bag of chocolate chips and the light corn syrup. Once the cream is piping hot, carefully pour the cream over the chips. Allow the chips, corn syrup, and cream to sit for 2 to 3 minutes before whisking to allow the chips to melt. Use a whisk to combine the hot cream, corn syrup, and chocolate chips. Continue whisking until the chips are melted. Cover the ganache with cling wrap and allow the ganache to cool for about 1 to 1 1/2 hours

Once the ganache has cooled, using either a stand mixer, or a handheld mixer, whip the ganache for 1 minute until fluffy. (If the ganache is a bit stiff, you can add ½ tablespoon of lukewarm heavy cream)

To prepare the ganache frosting for the cupcake, you can use a decorators frosting bag and larger frosting tip (Wilton tip 2D or 2A -or- a generic large decorators tip). If you don’t have these, you can use a gallon-sized Ziploc baggie with a small corner tip cut off.

Using either a gallon-sized disposable Ziploc baggie with a small section of the corner tip snipped off, or a decorator’s bag with no tip, fill the bag 1/3 of the way full of cream. This will help keep the cupcake filling process a bit less messy and give a bit more control. Twist the top unused portion of the bag to help keep air out and give more control of the cream flow. Place the tip of the bag into the cupcake and use light even pressure to fill the cupcake. Continue until all cupcakes are filled. You will have to stop and refill your baggie with cream. 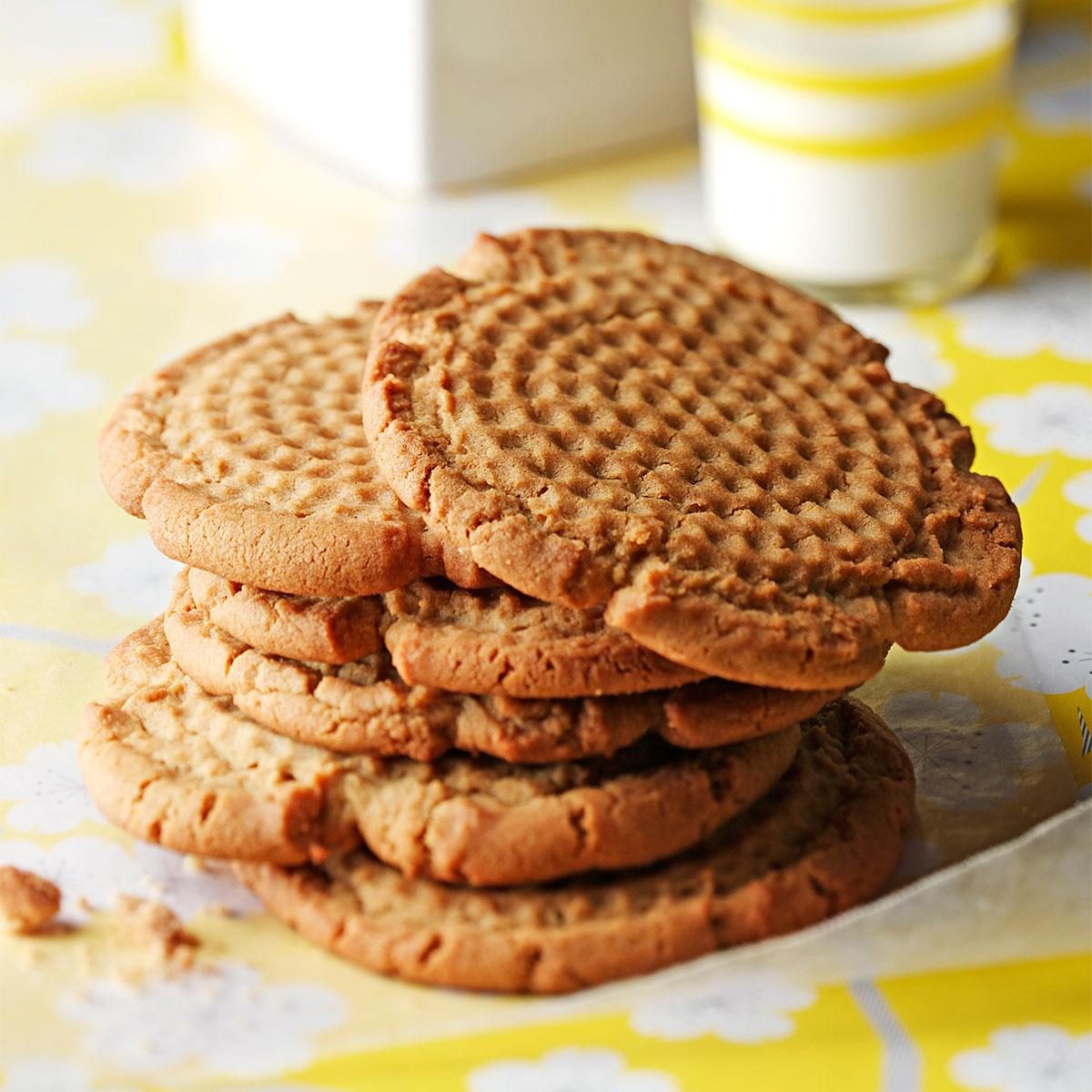 Preheat oven to 375F. In a large bowl, cream shortening, peanut butter and sugars until light and fluffy, 5-7 minutes. Add eggs, 1 at a time, beating well after each addition. Combine flour, baking soda and salt; add to creamed mixture and mix well.

Roll into 1-1/2-in. balls. Place 3 in. apart on ungreased baking sheets. Flatten with a fork or meat mallet if desired. Bake 10-15 minutes. Remove to wire racks to cool.

Test Kitchen tips: Use a glass with a pretty pattern on the bottom to add flair to these cookies.
———————- 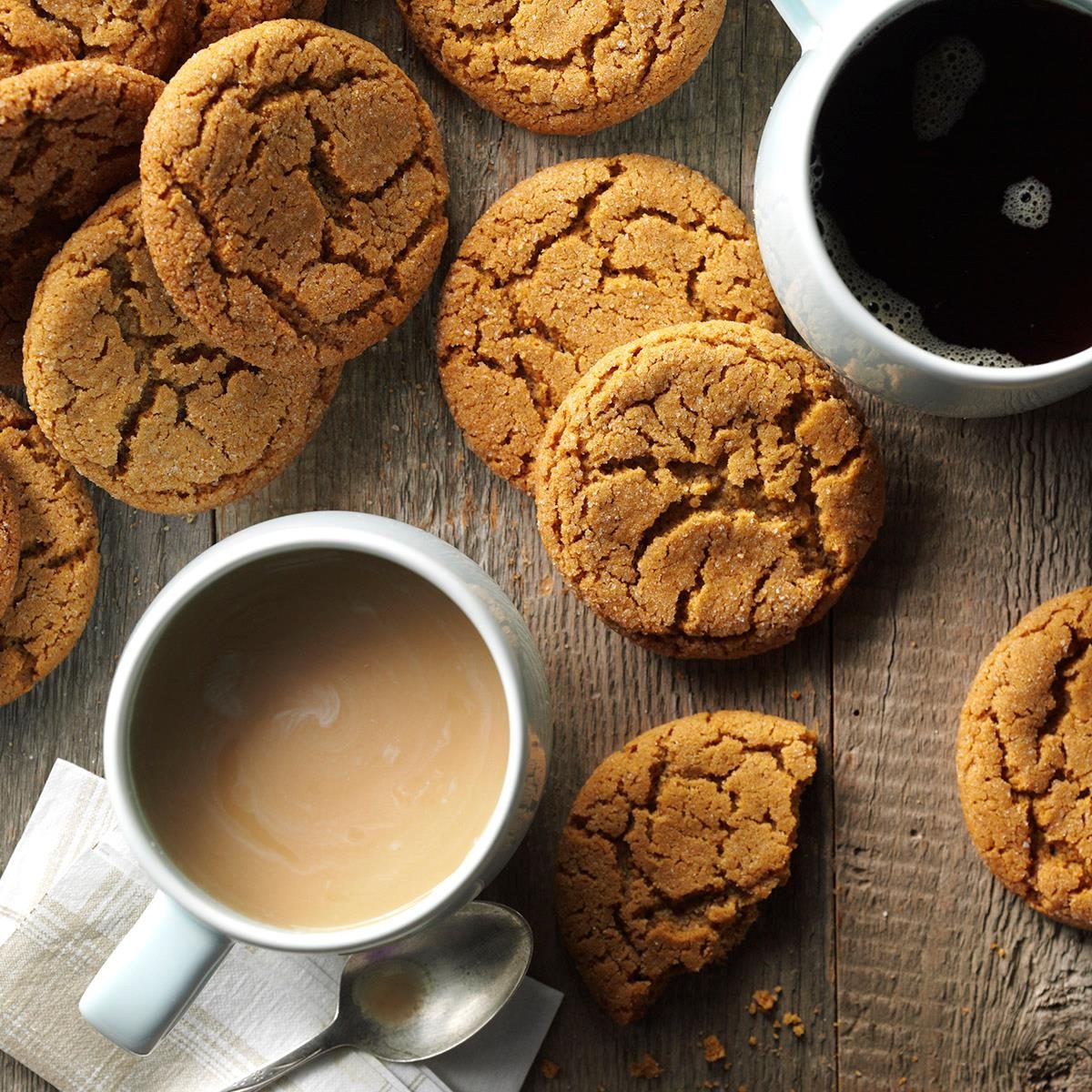 In a large bowl, cream butter and sugar until light and fluffy. Beat in egg and molasses. Combine the flour, ginger, baking soda, cinnamon, cloves and salt; gradually add to the creamed mixture and mix well. 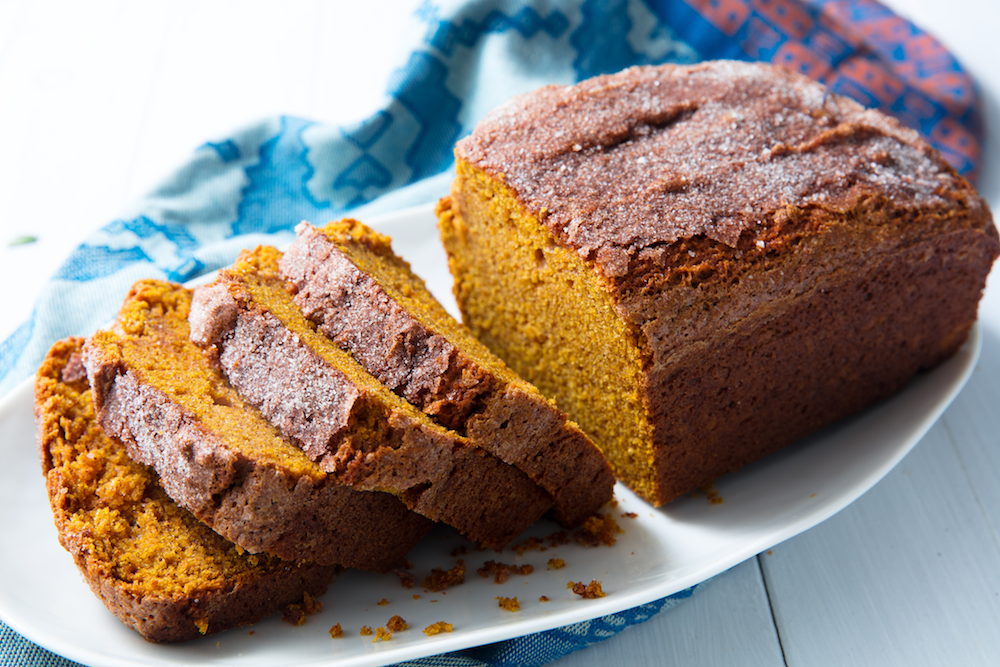 Preheat oven to 350F. Line an 8“-x-4” loaf pan with parchment paper then grease with cooking spray (or softened butter).

Bake until a toothpick inserted into the center of the loaf comes out clean, about 50 minutes to 1 hour.

Author’s note: Feel free to fold in 1 cup of extra stuff like chocolate chips, nuts, dried cranberries, or pepitas once the batter is made.
—————-

Makes about 10
If you want boozier pops, increase the gin to 1/3 cup. They will still freeze but not quite as hard, and they will get slushy quickly once unmolded. This recipe is from Bad Hunter in Chicago, IL.

Toast juniper berries in a dry small skillet over medium heat, tossing often, until fragrant and skins are very glossy, about 1 minute. Let cool slightly, then crush with a mortar and pestle (or place in a resealable plastic bag and crush with a rolling pin). Transfer berries to a small saucepan. Add sugar and ¼ cup water and bring to a simmer, stirring to dissolve sugar. Remove from heat and let sit 30 minutes. Strain juniper syrup through a fine-mesh sieve into a small bowl; discard solids. Place bowl in a bowl of ice water and let juniper syrup sit, stirring occasionally, until cold, about 30 minutes.

Do Ahead: Ice pops can be made 1 week ahead. Keep frozen.

Whisk cocoa powder, salt, baking powder, and 2 1/2 cups flour in a medium bowl. Using an electric mixer on medium-high speed, beat butter, brown sugar, and granulated sugar in a large bowl until light and fluffy, about 4 minutes. Reduce mixer speed to medium and add eggs and vanilla; beat until very fluffy, about 30 seconds. Reduce speed to low and gradually add dry ingredients, beating just until combined (use a large spatula to incorporate any dry ingredients at the bottom of the bowl). Divide dough in half and wrap each in plastic, pressing down to form into ½”-thick disks. Chill until firm, at least 2 hours.

Preheat oven to 350F. Let 1 disk of dough sit at room temperature until softened slightly, about 5 minutes. Roll out on a lightly floured piece of parchment paper into a large 1/8″-thick rectangle (about 16×12″), dusting with more flour as needed. Use a knife and a ruler (precision is key) to cut into 4×1-1/2″ rectangles, then use a thin metal spatula to transfer rectangles to a parchment-lined baking sheet, spacing 1″ apart. (If at any point the dough becomes too soft and sticky, slide dough with parchment onto a baking sheet and chill until firm.)

Chill dough on baking sheet while you repeat the process with the second disk of dough. You should end up with 30 cookies total. Save scraps for another use or discard. Prick cookies in several places with a fork. Bake, rotating baking sheets front to back and top to bottom halfway through, until edges are firm, 12–15 minutes. Let cool on baking sheets. Turn half of cookies over.

Line a 13×9″ baking pan, preferably straight sided, with 2 layers of plastic wrap, leaving several inches of overhang on all sides; place in freezer. Remove both pints of first ice cream flavor from containers (just peel away container if it’s paper, or use a rubber spatula to help slide ice cream out intact if container is plastic). Cut ice cream into 2″ pieces and place in a large bowl. Let sit until slightly softened, about 5 minutes, then stir with a wooden spoon or a large rubber spatula until the consistency of thick cake batter. Scrape ice cream into chilled pan and smooth into an even layer with a small off-set spatula. Freeze uncovered until firm, 15–20 minutes.

Repeat softening process with both pints of second flavor.

Scrape second flavor over first layer and smooth out, spreading ice cream all the way to the edges and making top as level as possible. Cover with plastic wrap and freeze until ice cream is hard, at least 8 hours.

Remove ice cream from freezer, unwrap, and invert onto a cutting board; remove pan and peel off plastic. Trim sides of ice cream block to make a neat, straight-edged rectangle measuring 12×7½” (yep, there’s that ruler again). Working quickly so ice cream doesn’t melt, cut block lengthwise into 5 equal rows and then crosswise into thirds so you have 15 pieces measuring about 4×1-1/2″ Working with 1 brick of ice cream at a time, use a thin metal spatula to place on a flat-side-up cookie and top with a right-side up cookie. Transfer sandwiches to a rimmed baking sheet set in the freezer as you work. Freeze sandwiches until ice cream is hard, about 2 hours. Cover tray with plastic wrap and freeze at least another 8 hours to let cookies soften. 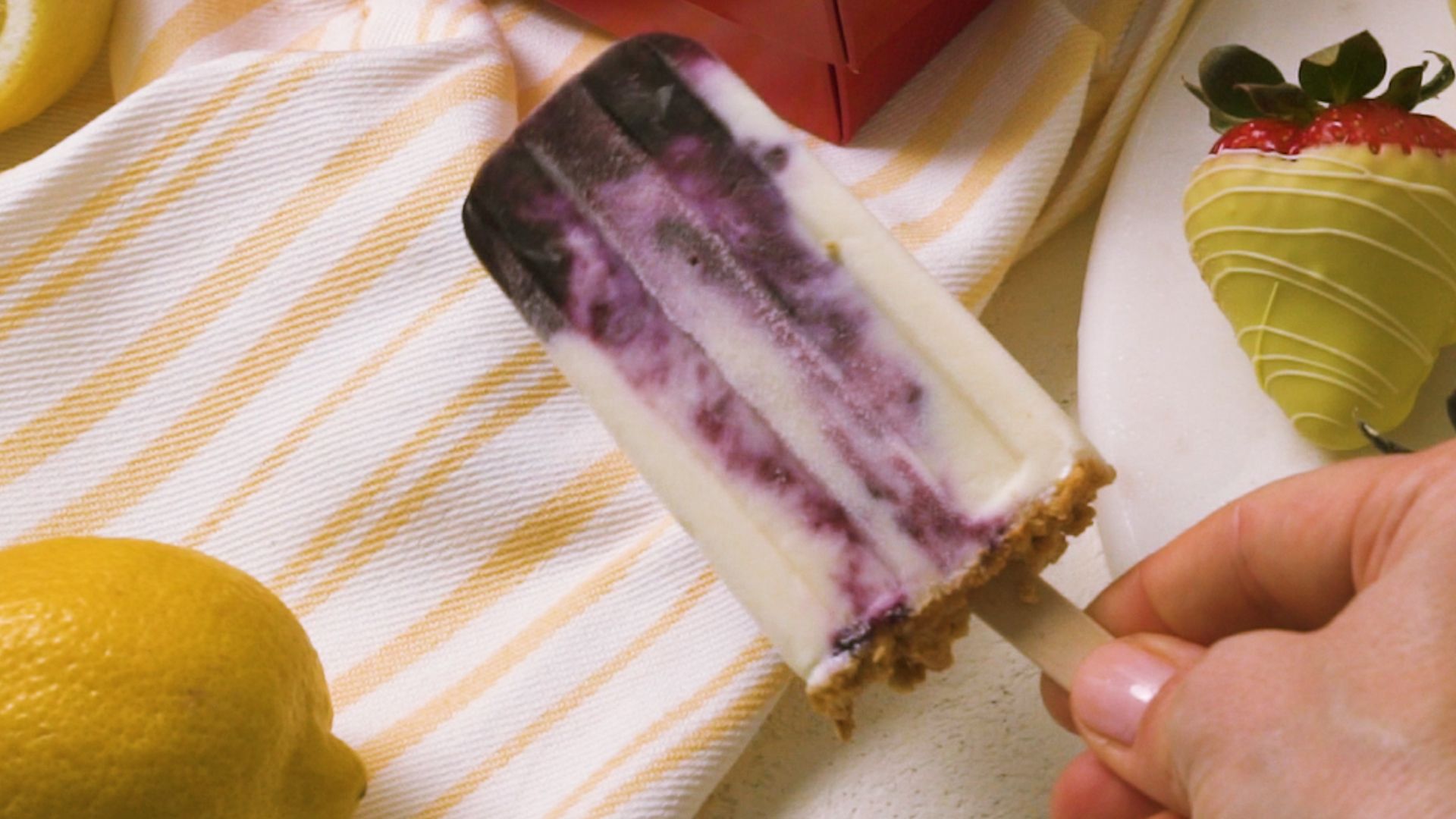 For the Blueberry Layer

For the Lemon Cream Layer

Make the blueberry layer: In a medium saucepan, combine the blueberries, sugar, lemon zest, and vanilla. Place over medium-high heat and cook, stirring and pressing on the blueberries with the back of a spoon until they release their juices and the mixture comes to a boil.

Reduce heat to medium and simmer, stirring occasionally, until juices are thick and syrupy, about 5 minutes. Remove from the heat and cool slightly (should have just about 1 cup mixture).

Before serving, run molds under warm water to loosen popsicles. 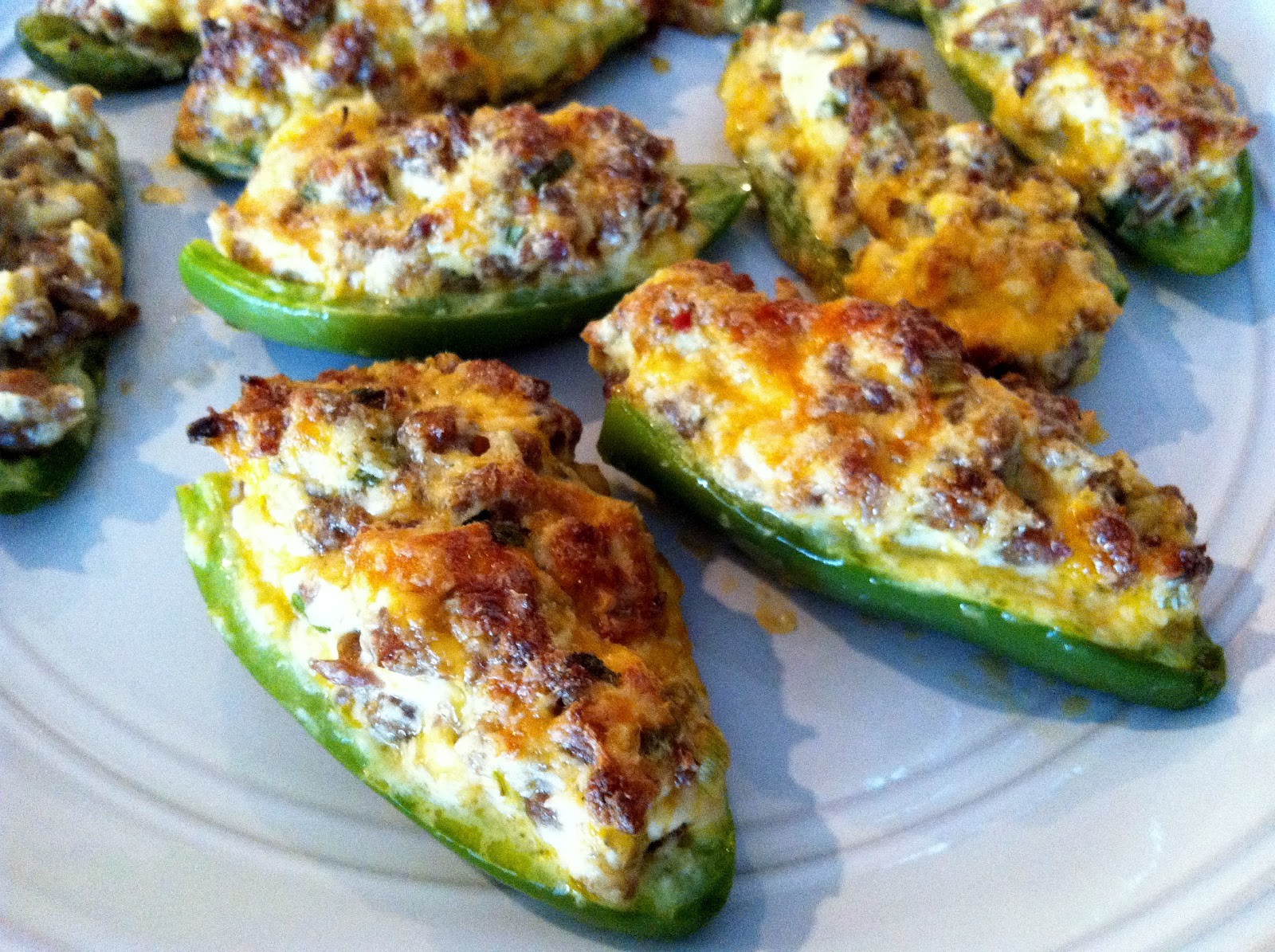 Makes 24 Servings (1 Jalapeno Half Per Serving)

Preheat oven to 400 degrees. Line a baking sheet with foil.

In a medium bowl, beat together cream cheese, cheddar cheese, salsa, cumin and salt. Stir in chicken. Spoon about 1 tablespoon into each jalapeno half and place on prepared baking sheet. If desired, sprinkle with paprika or chili powder. Bake about 20 minutes or until golden brown.